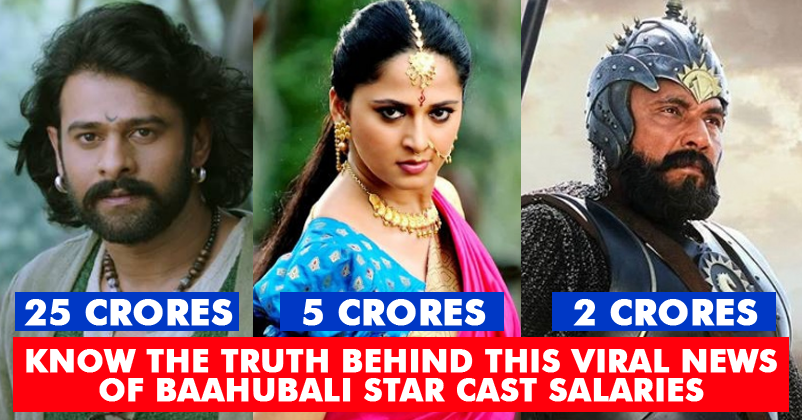 The conclusion to Bahubali franchise hit the screens on Friday and since then, it’s been on a record breaking spree. Apart from the main actors Prabhas, Anushka, Rana Daggubati, people are lauding SS Rajamouli for giving them something so wonderful. Obviously, he has put in so much of money and energy to come up with this epic movie.

It is said that the makers have spent a whopping 450 crores for this film, which in turn have fetched them huge profits. However, since 2-3 days, we are seeing some articles being circulated on the internet, which describe the salaries of the Bahubali stars. But wait, have you wondered as to where has this news come from? Do you think that the stars would openly reveal their salaries so that they hit the headlines the very next day?

Here’s what media houses reported about the salaries!

Mainstream media reported this news so confidently as if the stars had themselves given them interviews and revealed the amounts; check out the salary as per the media houses!

• Kattappa was paid a whopping 2 crores.

• Devsena got a salary of Rs 5 crores.

Let us clarify one thing that all this is fake and the figures that are being told are nothing but mere speculations. In reality, the earnings of the actors are known only when they file Income Tax returns; no one would randomly reveal how much they made out of the movie. Moreover, the earnings revealed in income tax returns also include profits from other businesses which they handle parallely and not just the movie.

Who actually started the trend?

We did our research and delved deep into this matter; we wanted to prove it to you that the information which majority of sites are serving you isn’t authentic as you think. This video started all the controversies.

As soon as this video was uploaded on the internet, another YouTuber copied the same, which further started trending at the 3rd position on YouTube, owing to its click-bait nature. Since people are enthusiastic to learn more and more about Bahubali 2, the earnings of the stars would surely be of great interest for them. Sadly, they are falling in trap of these so-called YouTubers who have just one aim i.e. attract more views and generate more revenue.

Very soon, even the mainstream media started covering this article and had headlines like these;

See the kind of language media houses are using to make you believe it’s true; it seems they have agents who are personally in touch with those actors and get all the information, LOL! Readers should be clear about one thing i.e. “Don’t believe anything and everything that you see on the internet.”

There are no official statements or sources to prove that these actors have got so much salary; based on speculations, fake information is being spread and readers like you are fooled.

If we talk about the first part i.e. Bahubali: The Beginning, we can say that there are credible reports which give an idea about the earnings of Rajamouli and Prabhas. The duo was included in the Forbes India Celebrity List (2015) and according to that list, Prabhas had earned Rs 20 crores, while SS Rajamouli had earned Rs 26 crores; so here comes the “Trust” factor; these reports are authentic and we wouldn’t mind believing them.

Next time, be very very careful before trusting a media house! You might never know when they would take you for a ride. You would invest few minutes in reading that news out of curiosity but at the end, you’ll be disappointed to know that what you read was false.

Save your time, do your research and make a wise choice. At RVCJ, you will never face such a bad experience as our dear readers have always been our priority; we believe in giving them a premium experience with factual news.

Firangi Actress Ishita Dutta Reveals How Kapil Behaves On The Sets! You’ll Be Surprised!
Priyanka Chopra’s Reply To Trolls On Her Dress Will Make You Fall In Love With Her Again!