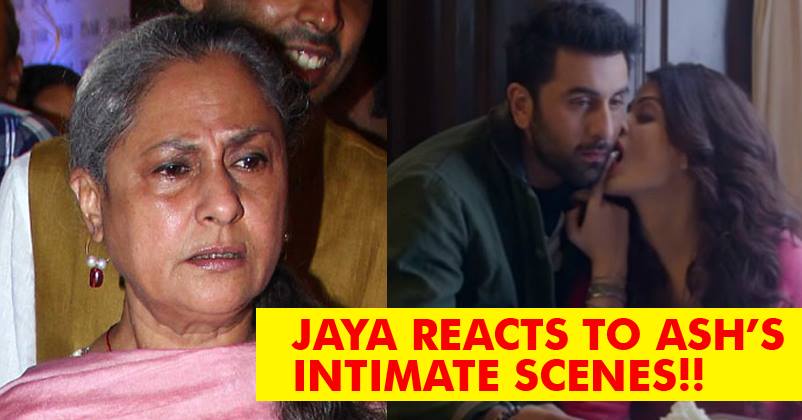 We recently reported that Jaya Bachchan while praising the works of Bimal Roy expressed her displeasure over the kind of films filmmakers make these days at the Jio MAMI 18th Mumbai Film Festival with Star.

She even expressed that instead of presenting art, filmmakers focus on body show and obscene scenes more without any shame. Though many thought that it was a sneaky dig on Ranveer Singh’s ‘Befikre’ but sadly they forgot about Aishwarya Rai Bachchan’s role in Karan Johar’s controversial flick ‘Ae Dil Hai Mushkil’. Even if you have not seen the film, some shots of steamy scenes between Bachchan’s bahu Aishwarya and Ranbir Kapoor are there in ADHM’s trailer as well.

People have also been talking about the age gap between Aishwarya and Ranbir by making their vintage picture viral. Ranbir too gave some hilarious explanations regarding the difficulties he faced while doing the intimate scenes with Aish. Though if we see from the perspective of an actor or actress, Aishwarya Rai Bachchan did what her job demanded. But, Jaya Bachchan’s statement marking the ‘open display of affection’ is raising many eyebrows.

This is what she exactly said…

This has happened in the past as well when both Jaya Bachchan and Amitabh Bachchan were upset when Ash locked lips with Hrithik Roshan in Dhoom 2 (2006). Seems as if the history is repeating itself. When media asked father-in-law Amitabh Bachchan about Aish’s role in ADHM, he simply said that he hasn’t watched the movie of the trailer yet.

Big B’s cold behaviour as well as saasu maa Jaya Bachchan’s strong words against the present filmmaking style are perfectly expressing their discomfort for Aishwarya’s role in ‘Ae Dil Hai Mushkil’.Though, there have been no revelations regarding Abhishek Bachchan showing any kind of negative sign regarding Aish’s role in ADHM.

What is your opinion about Aishwarya’s role? Do you think Jaya Bachchan and Big B’s discomfort about her role is valid? Do share your views with us in the comments section below! 🙂

Day 2 Collections Of ADHM & Shivaay Are Out! Check Out Who Was Ahead In The Saturday Race!
Ajay Devgn Played The Most Unexpected Prank On His Super-Fans! Reactions Were Hilarious!