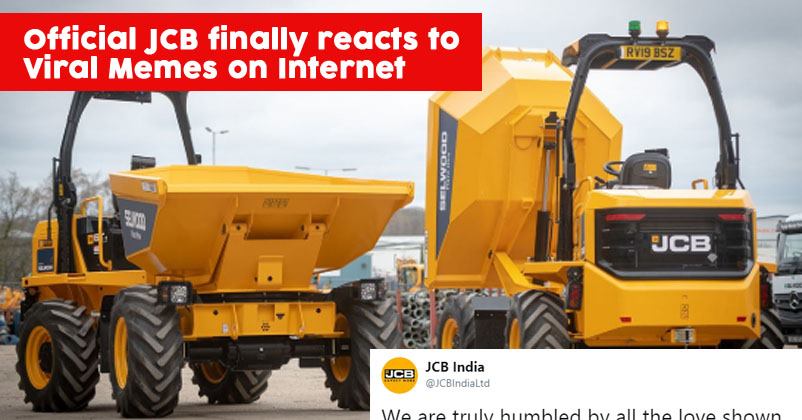 Memes regarding JCB, a piece of manufacturing equipment for construction, agriculture, trash handling, and destruction has taken over the internet since last few days. A peculiar hashtag is trending on various social media platform #JCBKiKhudayi and people are weirdly obsessed with old videos of JCB excavator digging up the dirt.

A Twitter user shared a screenshot of the youtube page showing several million views on videos of JCB excavators.

JCB khudayi jokes are so subtle yet so funny. Apparently the jokes are about how jobless are people to watch JCB digging videos on YouTube with these videos getting millions of views 😁 pic.twitter.com/AGaIWl04kg

In reply to millions of memes and funny video related to JCB making rounds on the internet, the company itself took to Twitter and thanked its customers and fans for so much love. With a short video of JCB, it wrote, “We are truly humbled by all the love shown for our brand with #JCBKiKhudai. Thank you to our customers and fans across India for your enthusiasm and support! With JCB, you can #ExpectMore. #JCBKiKhudayi.”

We are truly humbled by all the love shown for our brand with #JCBKiKhudai. Thank you to our customers and fans across India for your enthusiasm and support! With JCB, you can #ExpectMore. #JCBKiKhudayi pic.twitter.com/YsDwVa49AM

Here are some hilarious memes on JCB-

When u comes to know… #jcbkikhudayi is going on ur neighbour…😅😂😂😛😛 pic.twitter.com/oIqlASKHC9

If I was a JCB driver

How can Simran leave the show?
Raj helps her to see #jcbkikhudayi
…. pic.twitter.com/2pCfobU15T

We live in a society pic.twitter.com/waHzhTbFv0

Boss: Why are you not on office till now ?

#JCBKiKhudayi: JCB India Thanks Indian Customers And Fans For Their Love