Jasprit Bumrah is one of the best pacers of present times and at the moment, he is doing a good job for his Mumbai Indians team in the IPL 2020. However, one more thing which makes him stand apart from other bowlers is his unusual bowling action. In the past also, we have seen videos in which kids are trying to copy the bowling action of Bumrah but now a video is going viral on the Internet in which an international bowler is seen imitating Jasprit Bumrah’s bowling action. 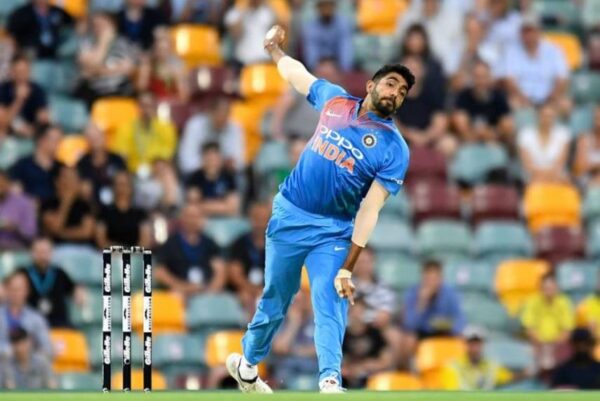 Rajasthan Royals (RR) and Mumbai Indians (MI) played a match against each other on Sunday (Oct 25) at Sheikh Zayed Stadium, Abu Dhabi. Before the match, both the teams had a warm-up session on the field and it was when the RR pacer Jofra Archer imitated Jasprit Bumrah. It is a very short clip but it is getting a lot of love online.

Jofra Archer is also one of the best pacers of the present day cricket and in the IPL 2020 too, he has proven his worth by taking 17 wickets for his team in the 12 matches that he has played. He has an average of 18.82 and economy of 18.82. Jofra who has given 320 runs in the 286 balls that he has bowled has also scored 107 runs in the four innings.

On the other hand, Jasprit Bumrah has also taken 17 wickets in the 11 matches that he has played with an average of 19.47 and economy of 7.52. He has conceded 331 runs in the 264 balls that he has bowled in the tournament.

As far as the match is concerned, RR’s Ben Stokes played a wonderful innings of 107 not out for which he played only 60 balls and helped his team in winning the match by chasing the target of 196 runs. Batting first after winning the toss, Mumbai Indians put up a score of 195/5 in the stipulated 20 overs. The highest scorer for MI was Hardik Pandya who scored 60 (21) and he was well supported by Ishan Kishan (37), Suryakumar Yadav (40) and Saurabh Tiwary (34).

RR lost its opener Robin Uthappa (13) and skipper Steve Smith (11) soon but Sanju Samson (54) along with Ben Stokes ensured that they don’t lose any more wicket and also win the match. Ben Stokes was adjudged as player of the match for his superb innings.

What do you think of Jofra Archer’s imitation of Jasprit Bumrah? Do let us know.