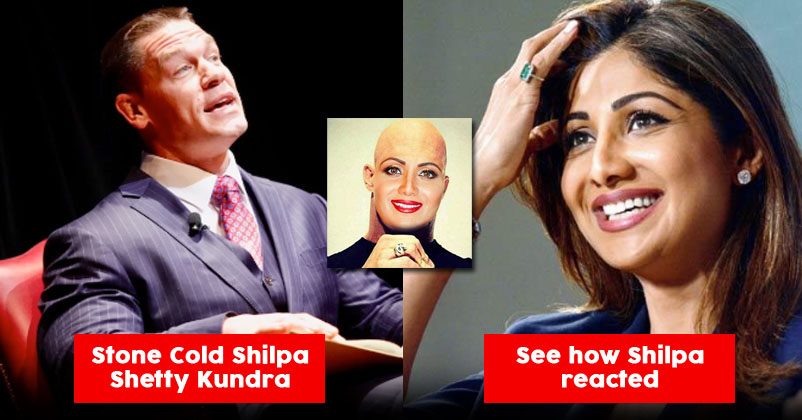 WWE wrestler and actor John Cena shared a photoshopped picture of Bollywood actress Shilpa Shetty Kundra on Friday. In this hilarious picture, Shetty’s face had been added onto the body of another WWE wrestler Steve Austin, who is popularly known by his ring name Stone Cold.

While people were surprised at John’s sudden liking towards Bollywood, Shilpa was totally amused at the joke. She reposted the picture on her Instagram and captioned it, “This is hilarious… I certainly ‘Didn’t SEE’ this coming’ @johncena.”

Other celebs also reacted to the post. This is not the first time John has an online encounter with the Kundra family. Three days ago Shilpa shared a video of her son Viaan Raj Kundra giving interviewer about his love for WWE and John Cena. The video when reached to John, he replied with his own video and made Viaan’s day.

OMG! My son @viaanrajkundra (7 going on 17 😅😂😍) first solo interview expressing his love for #WWE @wweindia and #johncena. I have noooo idea how he knows soooo much 😱!! Thank you #WWEIndia and @JohnCena for making his dream come true with that message.🙏 #ViaanRajKundra was ecstatic 🤗💪🙏🧿 #UCantSeeMe #wrestling #WWEinda #kids #son #pride #gratitude