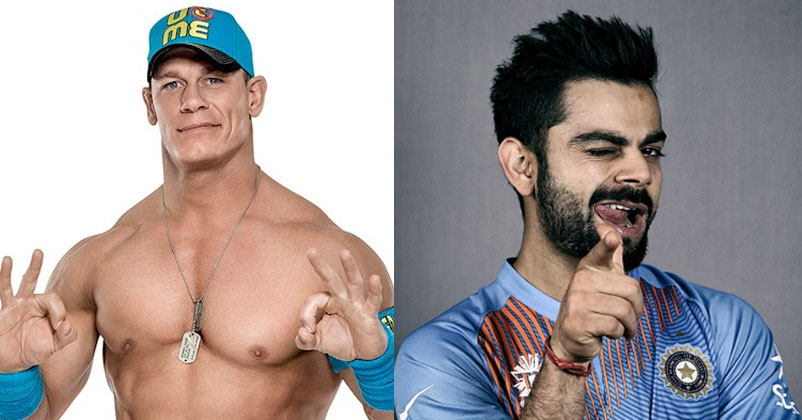 People say that to win matches, you need to fight hard for it. Cricket is not a different game. You need 100% dedication and hard work to make that happen. Cricket is considered as a gentleman’s game that has no space for violence. So it will be quite foolish of me to find a relation between cricket and wrestling.

Lately John Cena gave us a reason to talk about it. WWE Superstar John Cena and Cricket World’s Superstar Virat Kohli now finally have a link with each other. And No, they are not about to fight in the ring ! !

John Cena on Wednesday created a storm on social media when he posted a picture of Virat Kohli on his official Instagram account. Now fans all over the world were quite confused as Cricket is hardly played in the US region. Also John Cena and Virat Kohli had no connections whatsoever considering the kind of profession they are into.

So what made John Cena post a picture of Virat Kohli ?

Recently the WWE star John Cena was drafted into SmackDown in the 2016 WWE draft. Now the color of the SmackDown logo is ‘Blue’ and thus many people believe that considering the color of the logo, John Cena might have been a bit more obsessed with the BLUE color which he lately showed on his Instagram Account.

But why a picture of Virat Kohli ?

If you ever think about supporting someone with a blue jersey, what’s the first thing or ‘HASHTAG’ that comes into your mind ?

John Cena might have thought the same and on googling this hashtag, this is what he must have seen on the first page of google search. Go On, Try This ! !

He wanted to show his support and promote the word BLUE, and while doing so, he stumbled upon this picture with the hashtag ‘BLEED BLUE’ having an aggressive Virat Kohli’s picture in it. Bleed Blue was previously and is still one of the key slogans that we Indians chant whenever Team India perform irrespective of the sports they play.

This assumption by the people can be strengthened more by showing you the latest picture posted by John cena on his official Instagram Account. Some people thought that John Cena was supporting Virat Kohli ahead of India vs West Indies Test Match, although such a possibility is quite rare after John Cena posted his latest picture.

In the episode broadcasted on 4th July 2016, John Cena was attacked by “The Club” again however he was saved by Enzo Amore and Big Cass before the draft came where he will be exclusively performing in SmackDown.

Kohli is currently in the West Indies preparing for a hectic Test series. India is scheduled to play against West Indies for 4 Tests Matches starting from 21st July 2016. Virat Kohli will be looking forward to achieve a whitewash in the series as it will help Team India to climb up to the No. 1 spot in the latest ICC Test rankings.

Oh So This Is Anushka Sharma’s Way Of Tackling With Those Irritating Trollers & Their Stupid Trolls!
15 Astonishing Facts About Rajinikanth’s Kabali Movie.!!