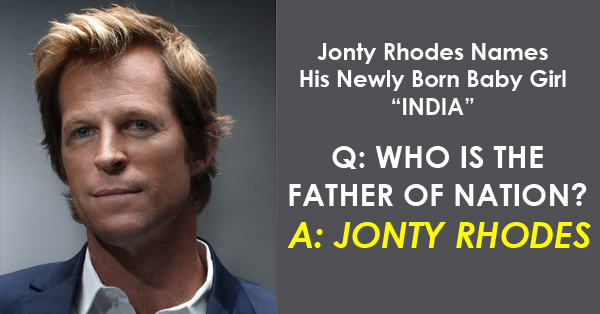 Former South African Cricketer and Legendary Fielder Jonty Rhodes is now a proud father of a baby girl and has named his newly born Baby Girl as “INDIA“.
The Current Mumbai Indians fielding coach and his wife Melanie Jeanee are proud parents of a Baby Girl who was born by Natural Water Birth on 23rd April at 3:29pm.
Dr. Bhupendra Avasthi of Surya Mother & Child Care Hospital at Santa Cruz (Mumbai) told to TOI that “Jonty Rhodes and his wife Melanie are overwhelmed by the new addition to the family.”
The Good News witnessed many reactions on Social Media. While very few were congratulating Jonty Rhodes. Many went on with hilarious and witty tweets. Have a Look at these people reacting to news that Jonty Rhodes Named the baby girl “INDIA”

Jonty Rhodes named his daughter India. She is the only South African who has 2 Cricket World Cups to her name.

Oh! Jonty Rhodes names his daughter India.
So, Rhodes now has India.
But when will India have roads? #ImportantQuestions

Jonty Rhodes names his daughter India.
I wish his surname were Rocks instead of Rhodes.

His son would be named Bharat.

Both Came From South Africa And Became Father Of Nation(INDIA)

Now that Jonty Rhodes has named his daughter India.. will someone please stand up and protest … Why didn't he name her Hindustan?

If someone buys Gold jewellery for Jonty Rhodes' daughter, she will be India Shining.

Jonty chose to show his love for the country and named his daughter after India and people are making fun of this. 🙁

Though the tweets are absolutely hilarious, this is a proud moment for all the Indians and shouldn’t be made fun of. Anyways THEIR TWEET THEIR CHOICE!! 😛

Team RVCJ congratulates Jonty on this very special occasion. More Power to you and your Daughter India.

Continue Reading
You may also like...
Related Topics:India, Jonty rhodes

These Sachin Tendulkar Sketches Will Make You Go Awestruck!! Some Of Them Are Autographed By Sachin Himself!!
14 Images Describing Difference Between Normal People vs Army People