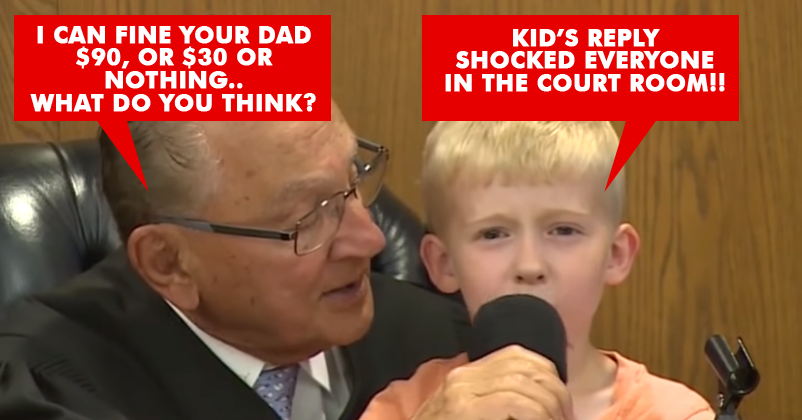 Today, we are here with a video which is going crazy on the Internet. We all adore kids and love them; there are several reasons for this. One of them is their innocence; their childhood determines the kind of person they are going to be when they grow up. A very spectacular event took place in a public court, where the kid’s intelligence and honest answer stole everyone’s heart. Read the complete post to find out. You can also watch the video at the end of the article.

A child is seldom seen in courts. Five-year-old Jacob accompanied his father to the court after, his father was charged for parking in a no-parking area. When the Judge saw Jacob, he asked him his name and called him over to sit with him on his bench. The Judge was very friendly to him and asked him if he went to school, and what was it that he wanted to do when he grew up. The whole scene is very pleasant to watch; the audience present there thoroughly enjoyed the moment and had a good laugh. The Judge then decided to ask the child to choose a punishment for his father. He laid down three options for him, he said he could either charge his father 90 dollars or 30 dollars or he could charge him nothing. The child’s judgement on this left everyone speechless. The child could have chosen his dad’s side and got him free from the ticket, but surprisingly without thinking about it twice, he said 30 dollars taking the middle way out. On this, the Judge said that he is a very good Judge, and complimented him by comparing him to King Solomon.

All came to a great ending, when the Judge cleared his father of all charges for his family, and inspired everyone. The Judge asked the man to take his son for breakfast, as he had just saved him 30 dollars. I am sure that this guy will never make such a mistake again.

Everyone is going crazy about the boy’s intelligence, the video has gained almost 13 million views on Facebook.

You can also watch the video directly on Facebook.

We totally enjoyed the video and can’t help but adore this little genius. Do let us know if you liked the video in the comment section below. 🙂

Man Couldn’t Satisfy Wife On Their Honeymoon & She Made Fun Of Him! Then This Happened
Judge Said Peacocks Never Have Sex & Mate Through Tears But Here’s How They Actually Mate