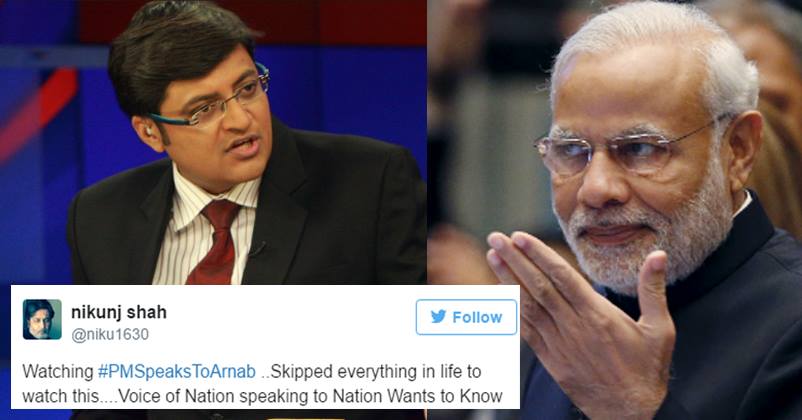 The Indian Prime Minister Narendra Modi has started talking to media now as his government has completed two years and celebrations for “Vikas Parv” are going on. He has given his first interview after becoming PM and it’s being said that he has decided to talk to media in order to improve the image of his government, nullify the effect of statements given by Subramaniam Swamy and give a proper answer to the opposition for calling his government’s achievements fake. Narendra Modi has given his first interview to Arnab Goswami of news channel Times Now and he is going to meet some more editors afterwards. This interview has already gained a lot of attention as it was trending on Twitter under the hashtag #PMSpeaksToArnab and many people are talking about it. Modi’s interview is a part of Arnab’s program Frankly Speaking and it’s just not possible that Twitter doesn’t react over it! Twitterati whole-heartedly showed their funny side and social media is flooded with lots of jokes and memes under hashtag #PMSpeaksToArnab.

Here are some selected tweets for you:

Hashtag itself says everything 😉

Arvind Kejriwal -》 Modi came on TV to attack me and insult AAP. He should immediate resign
#PMSpeaksToArnab

Arnab got 1st interview of Modi since he took over as the PM. Tonight Sardesai ji gonna need extra old monk & a sad GN song #PMSpeaksToArnab

Nayak’s sequel? Definitely our PM is not that stupid!

#PMSpeaksToArnab…..Hope it will not be sequel to 'Nayak'.

Reaction of popular journalists after seeing the interview:

Nation wants to know how Arnab managed to get this impossible interview? #PMSpeaksToArnab

This user felt as if it’s not an interview but a date:

ArGo blushing & praising NaMo's speech in the US, NaMo giggling — feel like I'm watching a date. Such shy, much coy, vaav #PMSpeaksToArnab

‘Voice Of Nation’ speaking to ‘Nation Wants To Know’

Watching #PMSpeaksToArnab ..Skipped everything in life to watch this….Voice of Nation speaking to Nation Wants to Know 🙂

The most shocking thing we got to know from #PMSpeaksToArnab is that Arnab Goswami can speak politely.

Surely these tweets would have tickled your funny bone!

20 Most Commonly Used Short Hands In Chatting
‘Zara’ Will Hate Rishi Kapoor For What He Tweeted About Them! You’ll Find It Hilarious!