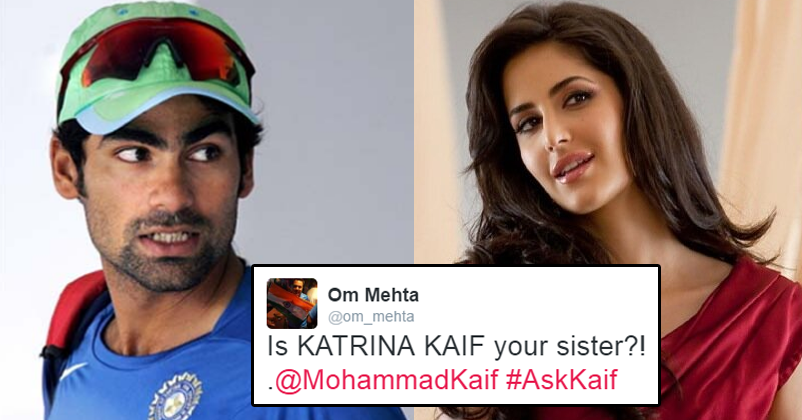 Mohammed Kaif is known as a great fielder. He won the hearts of whole country while playing for the country. And who can forget that amazing victory of Indian Cricket Team at Lords, where Kaif was the hero. That was a very famous win and former captain Saurav Ganguly took off his shirt in rivalry with Andrew Flintoff. Mohammed Kaif also captained Indian U-19 team and his side won U-19 WC in the year 2000. Mohammed Kaif is now the captain of Chattisgarh Ranji team and he likes to be in touch with his fans on various social media platforms. Kaif did Q & A session on Twitter where he asked people to ask him questions using #AskKaif. Here is his tweet

Will do a Q&A session today at 3pm.
Ask your questions using #AskKaif .

Let’s have a look at some of the best answers by Mohammed Kaif.

@MohammadKaif sir, is it true that your family went to watch movie during natwest final inning ? if yes than whats your reaction #AskKaif

Yes, they told me about it . Was surprised, but once Sachin was out, few would have expected what unfolded.#AskKaif https://t.co/b9ZG4zcNME

Some words for Sehwag?

@MohammadKaif Your most memorable moment as a Player of Indian Cricket Team??? #AskKaif

Has to be winning the Natwest Trophy finals at Lords.#AskKaif https://t.co/LfeFfj7jLv

Maintain discipline and Cha se your Dreams . They do Come true.#AskKaif https://t.co/hBAOhr9tuL

.@MohammadKaif Amongst things happening in world cricket ,what astonishes you the most #AskKaif

I think the Indian Army @adgpi is the biggest inspiration. The kind of sacrifices they make is unbelievable.#AskKaif https://t.co/g0LktowomL

No,there is hardly a place as tolerant as our India.Agenda of vry few people should not b encouraged.
Largely,wonderful people here#AskKaif https://t.co/k0GVDWvX1v

What gives you strength while dealing with fundamentalists and trollers?

@MohammadKaif Kudos for your stand against religious fundamentalists & trolls. Aren't you afraid of them ? What gives you strength?#AskKaif

When the intent is right,the future is bright and I haven't offended , disrespected or belittled anyone. https://t.co/kBmSodCW7v

Is Katrina your sister?

Mohammad Kaif won the hearts of the people of India when he played for the country. And now he is hitting boundaries on twitter. We wish him a very happy new year. 🙂

Om Swami Kicked Out Of The House Because He Did Something Disgusting With Bani!
Dhoni Resigns As Indian Cricket Captain! Here’s How Cricketers Reacted On Twitter!