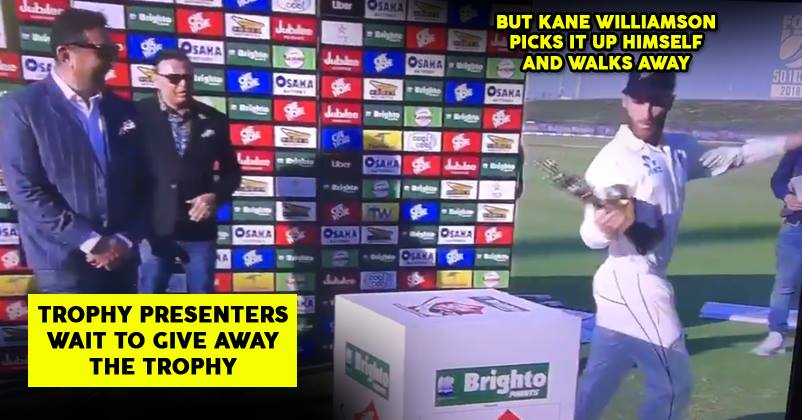 The cricket team of New Zealand made the fans happy by winning a 3 match test series against Pakistan at their home ground. The series was levelled by 1-1 but by winning the 3rd and final match, team NZ secured the “Oye Hoye Trophy”.

However, NZ skipper Kane Williamson got involved in a weird incident later. After the presentation ceremony got over, Williamson was invited on the stage to receive the trophy. Williamson reached at the podium but to the surprise of everyone, he didn’t wait for the panellist to come and present him the trophy. 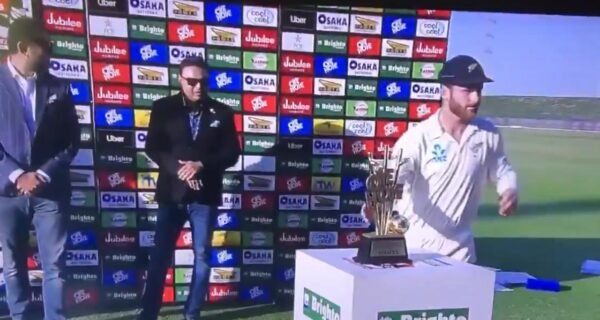 He took it all by himself and went back to his team. What more? He even grabbed the cheque held by one of his teammates and threw it right there before the whole team posed for the “Champions Pic”

The video of the same is all over the Twitter now. Have a look-

Just caught up with the excellent end of #PAKvNZ. This is one of the funniest trophy presentations I have ever seen. @SteelyDan66 gives the perfect commentary at the end. pic.twitter.com/NEV1PXZRk5

Continue Reading
You may also like...
Related Topics:Kane Williamson

Pant Sledges Australians Behind The Wickets By Saying, No Everyone Is Pujara. Twitterati Loving It
Gautam Gambhir Slams Dhoni For His Captaincy In 2012. Here’s What He Said