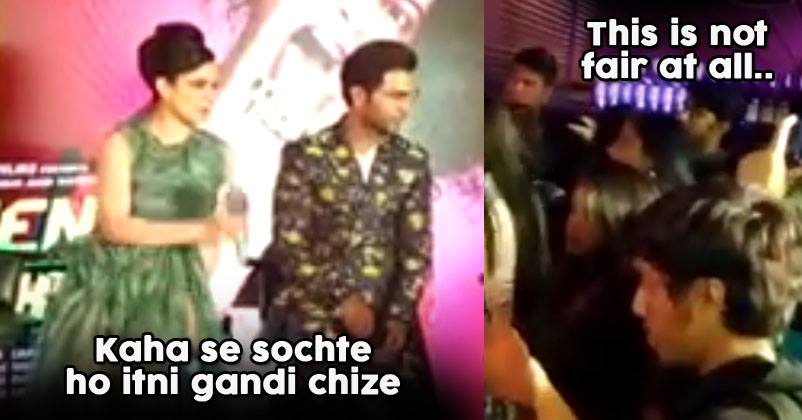 It seems like Controversy and Kangana Ranaut goes hand in hand. Recently, the National Award Winning actress got into a war of words with a journalist who was present at the music launch event of her upcoming Judgementall Hai Kya along with Rajkumar Rao.


Kangana accused a reporter of giving negative reviews to her movie Manikarnika and she also claimed he is running a “smear campaign” against her. Kangana refrained to answer any of the questions and it worsened the situation. Rajkumar Rao and Ekta Kapoor tried to stop the actress but they failed miserably.

Kangana also asked the reporter, You are bashing my film Manikarnika. Have I made a mistake by making a film? You are calling me a jingoistic person for making a film on nationalism.

The reporter instantly protested against the Manikarnika actress and told She is being unfair and it’s not fair on her side to say such things about a journalist. The reporter further added, Kangana is trying to intimidate him.

Kangana said she is not trying to intimidate anyone she is just being candid and she thought he was her friend who had lunch with her in her vanity for three hours. Kangana further said she had an interview with the journalist in the past, after which he personally texted her.

Justin, the reporter instantly denied the claims made by Kangana and he even asked Kangana to share screenshots of his text messages as proof.

Kangana and her sister need to stop attacking every alternative person if they don’t wish to get bashed by them. This is UNFAIR!

Continue Reading
You may also like...
Related Topics:ekta kapoor, Kangana Ranaut, Kangana Ranaut Gets Into UGLY FIGHT With A Journalist At An Event, Mental Hai Kya, Rajkumar Rao