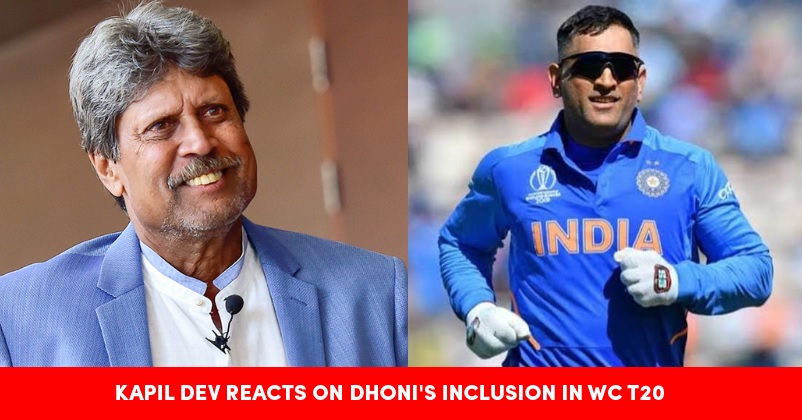 The Indian Premier League is one of the biggest sports events of the world and many cricket lovers are eagerly waiting for the tournament to start so that they can enjoy some great game. However, the fans of Dhoni are waiting for IPL so that they get to see their Thalaiva on the field once again as the former skipper is out of the Indian squad since the ICC World Cup 2019. The last match which was played by MS Dhoni was the semi-final of ICC World Cup 2019 in which India was defeated by New Zealand.

While many cricket lovers are hoping to see Dhoni back in the Indian squad, there are some who want him to take retirement so that the new talent can be included in the team. Dhoni has chosen to remain mum on this matter but Ravi Shastri, the head coach of the Indian team, has stated that Dhoni may get a berth in the Indian squad provided he performs well in the IPL 2020.

When the former Indian cricketer Kapil Dev was asked a question regarding Dhoni’s comeback, the veteran player said that Dhoni is not playing the IPL alone, many other players are also playing and he will prefer to look at the young talent who can make us proud for the coming 10 years. As per Kapil Dev, Dhoni has already done a lot for the country.

Kapil Dev was talking to mediapersons in an event in Noida and during the interaction, he said that he is also a fan of MS Dhoni and will love to see him playing the T20 World Cup but the team management will take care of it. He further added that Dhoni has not played for a year now and he should play some more matches as different parameters can’t be set for different cricketers.

Kapil Dev has clearly stated that he will love to see Dhoni in the IPL 2020 but as age is not on the side of wicketkeeper-batsman, he will like to focus on the young Indian talent.

MS Dhoni will start his training for the IPL from March 2 and the first match of the tournament will be played between Chennai Super Kings (CSK) and the defending champions Mumbai Indians (MI).

Do you agree with Kapil Dev that Dhoni should play more matches to get included in the Indian squad? Let us know.