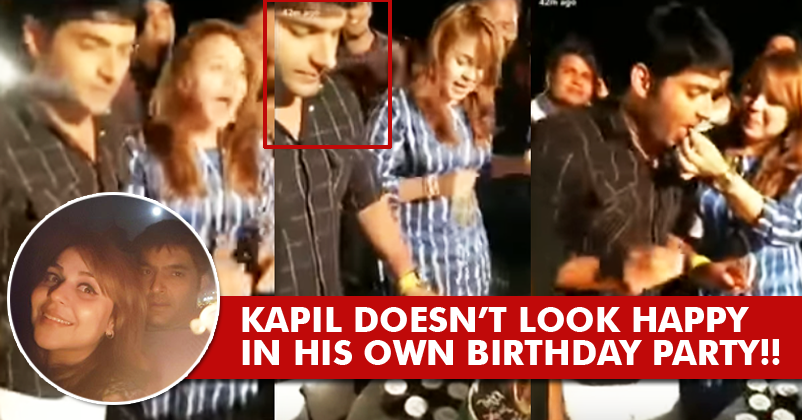 Kapil Sharma introduced his girlfriend to the world on Twitter on the unfateful day of his fight with Sunil Grover.

People were happy about Kapil Sharma’s new relationship status but the fight with Sunil Grover spoilt the happiness. Things thereafter are not same for Kapil Sharma.

Will not say she is my better half .. she completes me .. love u ginni .. please welcome her .. I love her so much:) pic.twitter.com/IqB6VKauM5

In this tough time, Ginni stood by Kapil like a pillar. It was Kapil Sharma’s birthday on April 2nd and no one from his team except Kiku Sharda wished him.

Kapil was heartbroken with the entire fight and controversy. As Kapil was shooting in Rajasthan for his movie Firangi, there were no big celebrations also.

Ginni was also accompanying Kapil in Rajasthan. She made sure to celebrate Kapil’s birthday. She had arranged a birthday cake after which there was a cake cutting ceremony.

Ginni did surprise Kapil but Kapil was not really very happy. You can watch the video below.

Though Kapil was glad about the surprise, there was this sadness in his eyes that is evident in the video.

Ginni is trying her best to make sure Kapil comes out of the controversy soon.

Kapil Sharma revealed to a leading daily that he might get married next year to Ginni, he said,

“Why don’t people believe me? (laughs). Yes, it is true. Ginni and I are in love and she is lovely. We are not engaged yet. I will get married next year. I am very happy.”

Well, we wish things are all happy and positive just like they were and we hope Kapil Sharma and Sunil Grover are back together.