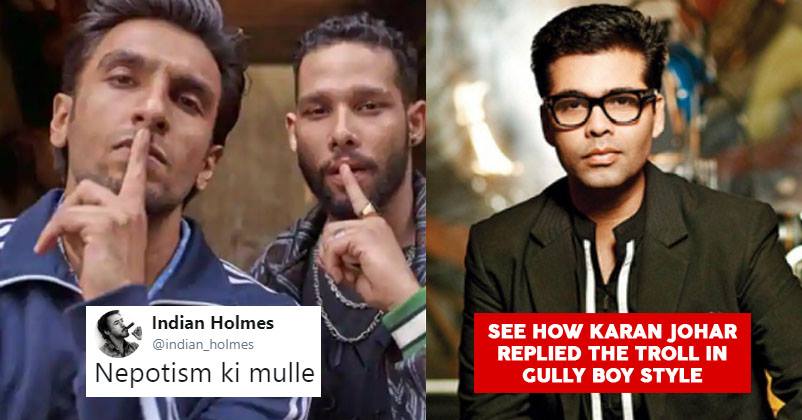 Ranveer Singh and Alia Bhatt starrer “Gully Boy” is not only performing well on the box-office but also getting appreciation from the all the corners of the world.

Karan Johar, the famous movie producer-director, also took to the micro-blogging site Twitter to praise director Zoya Akhtar and the team of the flick. He called “Gully Boy” his favourite movie of the decade and declared Zoya Akhtar as his favourite director. However, he expressed his inability to pour his heart out on Twitter as it has a limit of 280 characters so he chose Instagram account to make a complete post.

This is what KJo tweeted, “I wish Twitter had more than 280 characters for all the brilliant characters of #gullyboy so had to take to Instagram to share my thoughts on this incredible film and my favourite film this decade! Zoya Akhtar is my favourite filmmaker!”

Some Twitter users liked this tweet but one user seemed to hold grudges against KJo and tried to troll him by calling the moviemaker “Nepotism ki mulle” which loosely translates to head of nepotism.

This is not the first time that Karan Johar has been accused of nepotism as earlier actress Kanagana Ranaut called him the ‘flagbearer of nepotism’ and many times, he has been trolled for supporting and launching star kids in the industry.

This time, Karan was also not in the mood to let go and he shut the troller in “Gully Boy” style by saying, “Chup kar aur picture dekh!!!!!” (Shut up and watch the movie!)

People praised Karan for the ultimate response that he gave to the troller. Check out some of the selected reactions:

@karanjohar replying like a badass that he is ❤️❤️

Sir whatever ppl say it is ur unique attitude and sense humour which we enjoy a lot. U brings smile to many ppl. Keep rocking with ur sense of humour and fashion sense as well. Loads of love for ur babies too.

Here is the Instagram post in which KJo has praised Zoya, Ranveer, Alia and the team of “Gully Boy”.

When passion supersedes grass root realities…when dreams make you wake up to bigger dreams….when you wrap rap into a form of solid expression….when you tell a story that has all this and more….that’s when you have a film that you can assuredly call a MASTERPIECE of modern times! @zoieakhtar weaves a story of aspirations in the underbelly of Mumbai like a bonafide magician….she slowly reveals every trick in her genius bag and you walk away with a lump in your throat and a swag in your step! #apnatimeaayega becomes your life mantra and all you want to do is dance the dance of great Cinema! I have just witnessed a cult classic that has possibly the best ensemble of actors we have seen this decade… @ranveersingh delivers the loudest quiet performance oscillating between silence and storm and you are left awestruck by his immense versatility and ability to sink his teeth into every single character….he makes you feel every beat of Murad’s beats! Outstanding!! What do I say about the girl wonder @aliaabhatt who explodes like a volcano every time she appears on screen! You wait for her and worry about her next move with joy and excitement! ! She is so so so brilliant! I think Safeena deserves a spin off film of her own! @siddhantchaturvedi makes a smashing debut as MC sher ! He is pitch perfect balancing arrogance and goodness with the ease of a veteran! Every member of the ensemble is terrific! Congratulations to my friends @ritesh_sid and @faroutakhtar for producing this gem of a movie! And finally my dearest Zoya……you are my favourite filmmaker and I feel so proud that I can witness your genius unravel at close quarters!! Well done team #gullyboy the entire technical crew needs a standing ovation!!!! What a film!!!!!!👋🏻👋🏻👋🏻👋🏻👋🏻

Did you watch “Gully Boy”? How did you find it?

Top 5 Bollywood Stars According To The Business Of Their Last 5 Films. Ranveer Replaces SRK
Malaika Arora Reveals How Her Family And Relatives Reacted Before Her Divorce With Arbaaz Khan