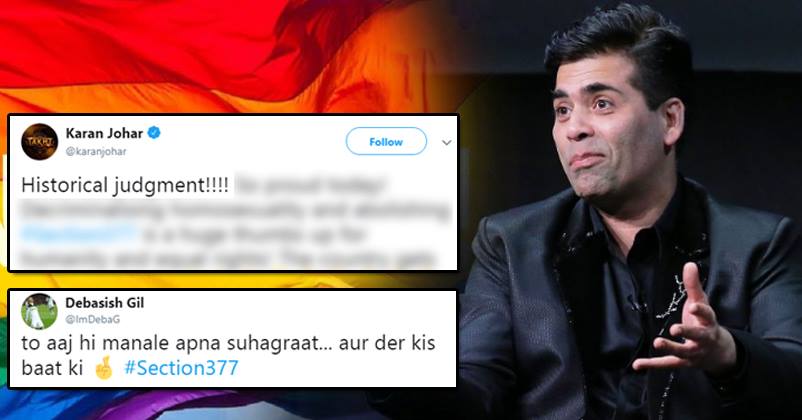 Finally, section 377 is decriminalized in India and it is indeed a day to celebrate. This battle was a long one and now that the Supreme Court has driven it out of India, LGBT community is happy.

As per earlier law, having a relation with person of same s*x was considered illegal. Punishment was in the form of fine and imprisonment.

Since this law has been abolished, many celebs took to Twitter and called this judgment as “HISTORICAL” one. Even Karan Johar couldn’t stop himself from tweeting about this. He took to his Twitter account and wrote;

Historical judgment!!!! So proud today! Decriminalising homosexuality and abolishing #Section377 is a huge thumbs up for humanity and equal rights! The country gets its oxygen back! 👍👍👍💪💪💪🙏🙏🙏 pic.twitter.com/ZOXwKmKDp5

As soon he tweeted that, many people started trolling him left and right. Trolls didn’t spare him at all. Here are some;

Karan johar sir, today Supreme Court strike down article 377. It’s a historic day for the people who believe in equal rights for all. Congratulations to both of you. pic.twitter.com/15RlxpApnZ

Well, people are having a lot of fun on Twitter. We so wish Karan replies to all of them and shuts them down.

Continue Reading
You may also like...
Related Topics:KARAN JOHAR

“Jalebi” Star Rhea Chakraborty Is One Of The Hottest Actresses Ever & These 12 Pics Are The Proof
Fans Trolled Kiara Advani For Having Cheek Job Done. She Shut Them Like A Boss