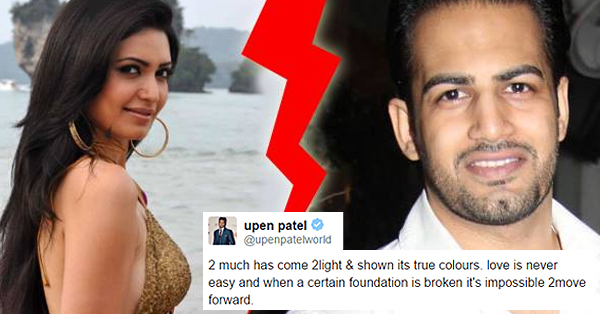 We months ago have shown you that how model turned actor Karishma Tanna found her real love on BIGG BOSS-8 and it was none other than her co-contestant in the show – Upen Patel!!
But it seems like the season of breakups have victimized this couple too. This year has seen some popular breakups in the B-Town and now it is Upen & Karishma who parted their ways.
Upen Patel on Saturday confirmed this news about his relationship on his official twitter handle.
He on his handle tweeted :

Also seems he has been hurt by the breakup and thus he tweeted:

Soon after Upen Patel confirmed about parting ways with Karishma, she also went out to tweet a obscure tweet which shows that she is certainly not happy with the decision.

Upen Patel had proposed to Karishma Tanna on the sets of very popular Celeb dance show NACH BALIYE while they contested together in the show. Later the couple hosted a reality show for MTV called the MTV Love School.

KRK Is Back With His Insulting Tweets! This Time His Target Is PM Modi! Check Out!
This Woman From Bengaluru Spent 1 Lakh On Hair Straightening! What Happened To Her Is shocking!