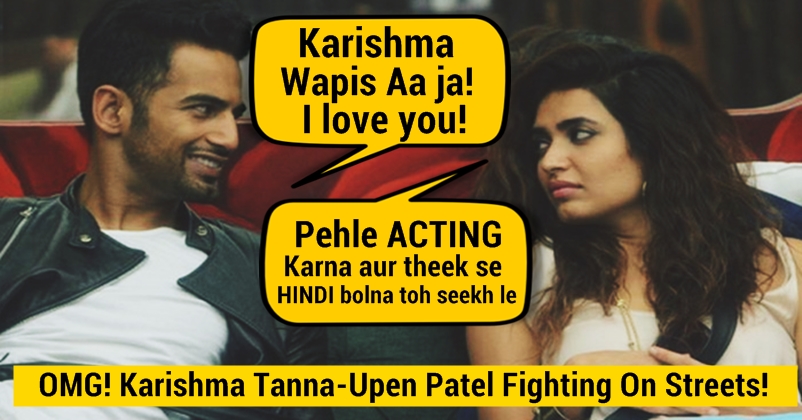 The Model-turned-actor, Upen Patel and TV actress, Karishma Tanna, the couple who met on Bigg Boss season 8 started dating each other on the reality show. However they both decided to part their ways. In a dramatic turn turn of events, the ex-couple Karishma Tanna and Upen Patel were recently spotted having a noisy argument on the street of Mumbai last night. Karishma Tanna, who was in the car, accompanied with a friend, asked Upen to get in to the car. She wanted to talk to him. However, Upen denied her request and refused to listen to her at first. Karishma, annoyed by Upen’s stubbornness and arrogance, started complaining to her friend about Upen. How Upen always does that. Seconds later, Upen got into the car, the ex-couple sat in the car, started talking and their arguments continued. A few minutes later, Karsima came out of the car and started crying, her friend tried to comfort her. While Upen too looked upset as he sat on the footpath.

Then Upen Patel called up for his BMW. When the car arrived, he left the place along with his ex-girlfriend. But after a few minutes, the actor was again spotted walking back only to hire cab and leave alone. Their public drama didn’t end here, there was a lot more. After a few minutes, Karishma and Upen got into the car again, but they got out again with teary eyes. This public drama went on for about 40 minutes and caught of a lot eyeballs. Many people gathered around and were entertained by the couple’s public altercation. The Karishma Tanna-Upen Patel love story began and climaxed on TV. Both actors met at the Bigg Boss house, and fell head-over-heels in love. During their time on Nach Baliye, Patel proposed to Tanna, and their love story seemed to be moving forward smoothly without any glitches.

Here’s How Akshay Kumar Has Perfectly Taught All Politicians The Value Of Martyrs! RESPECT !
10 Hollywood Movies That Are Copied From Asian Cinema