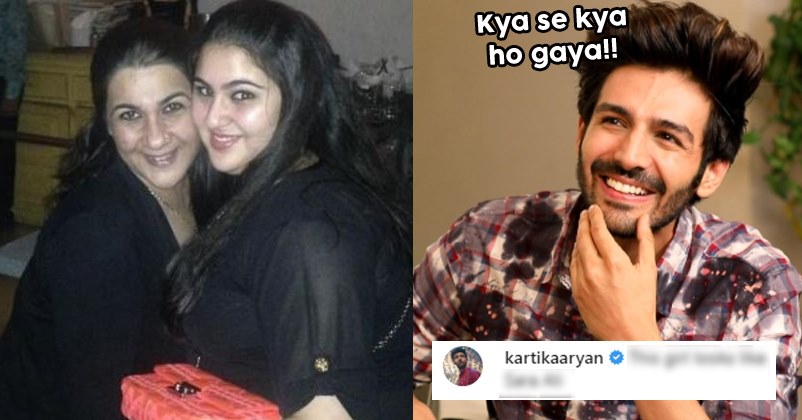 Sara Ali Khan has literally come a long way since her college days. She used to weigh around 95 kgs when she was studying in Columbia. And now no one would believe that it is true. She went through a transformation and now she is slim and fit.

Sara shared an old photo with her mother Amrita Singh on Instagram in which she is unrecognizable. The mother-daughter duo is twinning in black. Sara captioned the picture, “Throw🔙 to when I couldn’t be thrown🔙☠️🙌🏻🎃🐷🦍🍔🍕🍩🥤↩️ #beautyinblack”

While fans were shocked to see Sara’s old photo, her co-star and rumored boyfriend Kartik Aaryan left a very sweet reply on her post. Kartik wrote, “This girl looks like Sara Ali.”

Sara had earlier revealed that she is suffering from PCOD (Polycystic ovary syndrome) and that is why he gained too much weight. But when she realized that she wanted to become an actress she went through a strict diet, exercise and disciplined life.

On the work front, Sara and Kartik will be seen together in the sequel of Love Aaj Kal.

Fans Ask Why Captain America Traveled Back In Time, Avengers Writers Have The Answer
Twitterati Asks “Who Is The Best Teacher”, People Came Up With Hilarious Answers