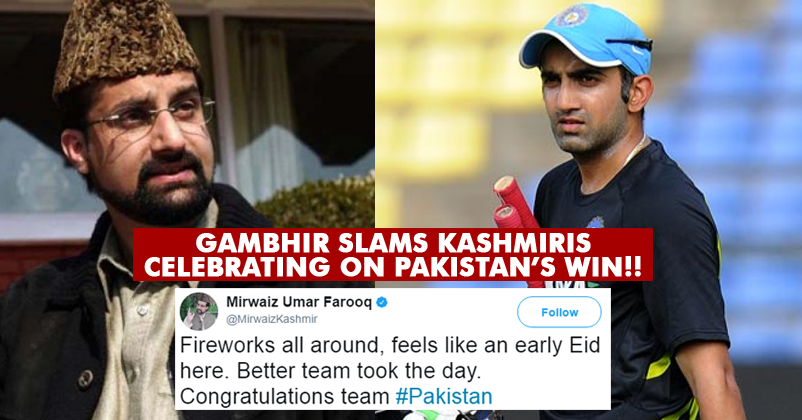 It was a tough day for Indians yesterday. Just when everyone was sure that Team India will win the ICC Champions Trophy final, Team Pakistan came as underdogs and took the match away.

The Pakistani team was just brilliant in every aspect yesterday, so even if all the Indians were heartbroken, they didn’t fail to congratulate the neighbours. However, what left us shattered was seeing some Kashmiri separatists celebrating Pakistan’s victory over India with fireworks. While there is no harm in congratulating the opponents, you just can’t celebrate our loss to them, if you have even slightest of love for our country. This is how Kashmiri separatists celebrated Pakistan’s victory over India.

The whole KASHMIR has gone into Frenzy on Pak win over arch rivals India in Champions Trophy final #PakistanZindabad pic.twitter.com/P7O7XbD5D9

It is #Eid a week earlier in downtown Srinagar. Kashmir is out on the streets. Another Referendum. pic.twitter.com/MXJgTgGQ6e

Separatist leader and chairman of the Awami Action Committee, one of the two key factions of the All Parties Hurriyat Conference, Mirwaiz Umar Farooq also tweeted-

Now, this was a clear provocation to which former Indian cricketer, Gautam Gambhir replied in a perfect way. Here’s what he said-

A suggestion @MirwaizKashmir why don't u cross the border? U will get better fireworks (Chinese?), Eid celebs there.I can help u wid packing

A suggestion @MirwaizKashmir why don’t u cross the border? U will get better fireworks (Chinese?), Eid celebs there.I can help u wid packing. Woah! That was a superb reply and a slap on the face of Mirwaiz who was trying to break the unity of India. Of course, he didn’t tweet after that. Here’s how people reacted to Gambhir’s tweet-

We missed you in Team India in Final 😀

Missed u in today's match 😭

I am n wil alwys remain ur grt admirer nt only 4 ur classy cricket bt 4 a true Indian. Respect 4 ur comitmnt twrds nation on & off d field🙏

Well, what are your thoughts on this?

Rishi Kapoor Thrashed On Twitter By Pak Fans After Pakistan Won Trophy Of ICC Championship 2017
Pakistani Reporter Asked Kohli If “No Ball” Was Pleasant Moment For Him! Here’s What He Replied