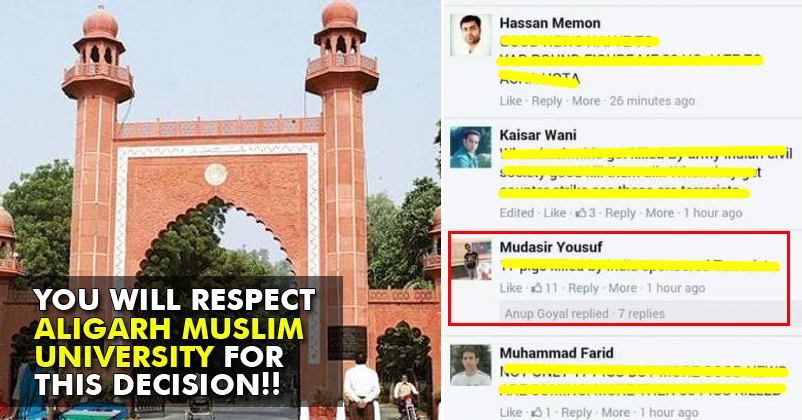 The entire nation was angered after India’s eighteen brave heart soldiers had to sacrifice their lives. The militant attack on an army base in Uri, Jammu and Kashmir claimed the lives of eighteen soldiers. The entire country is mourning the loss of these brave soldiers and even news channels are continuously broadcasting updates related to the Uri terrorist attack. They are doing special coverage segments on the 18 martyred soldiers who were killed after four heavily armed terrorists attacked an administrative base near 12 battalion headquarters in Uri, close to the Line of Control (LoC) on Sunday. A Kashmiri student was expelled from the Aligarh Muslim University (AMU) on Monday for posting ‘objectionable’ comments on Facebook over the attack on the Indian army base in Uri area of occupied Kashmir.

Here are his comments… Modasir Yousuf was expelled for posting objectionable comments on the Uri terror attack. AMU Vice Chancellor Lt Gen Zameer Uddin Shah took a very serious view of the issue and expelled the student. The student, Mudassar Yusuf hailing from Srinagar, had even apologized to the Vice Chancellor for his controversial post, he stated that he was “carried away by sentiments”. Modasir Yousuf was pursuing MSc in organic chemistry. AMU Spokesperson Rahat Abrar spoke to media, he said, “AMU vice-chancellor Lt Gen Zameeruddin Shah took a serious view of the issue and expelled the student concerned, who was pursuing MSc in organic chemistry from the varsity, after personally probing the matter. Lt Gen Shah said that there was no scope at AMU for tolerating any incident which smacked of anti-national sentiments.”

BJP Lok Sabha Member from Aligarh, Satish Kumar Gautam had also written to the Vice Chancellor asking him to take a strict action against the student for his Facebook post.

Due to the sensitivity of the issue, AMU went with the expulsion of the student for his unpardonable comments.

Here’s The Most Valuable Player Of Indian Team As Per Kapil Dev! No It’s Not Virat Kohli!
SHAMEFUL! What This Spa Did To A Lady Suffering With Vitiligo Is Gonna Make You Hate It!