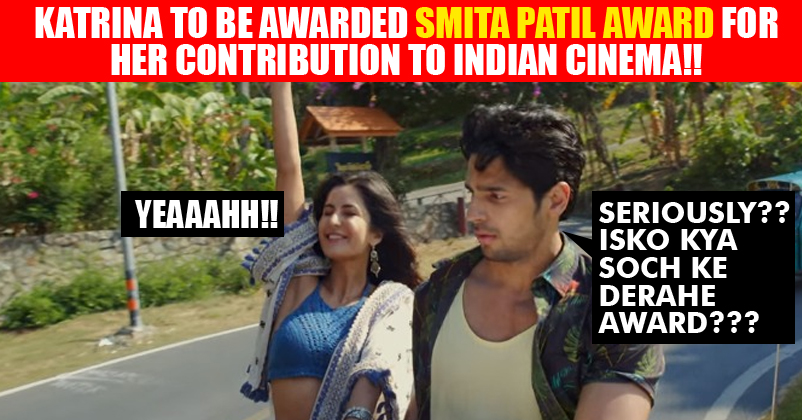 You heard it right? Katrina Kaif will be honored with the Smita Patil Memorial Award for her immense contribution to the Indian Cinema. She will receive this award by the Priyadarshini Academy Global Award on September 19th. She is part of the film industry for many years and is also one of the top actresses in Bollywood. She has also worked with top actors like Salman Khan, Shah Rukh Khan, Hrithik Roshan, Ranbir Kapoor and Amitabh Bachchan. The NGO Priyadarshini Academy has been holding this award since 1984. Till date, they have bestowed a number of the talented actresses from the Bollywood. In 2014, Priyanka Chopra received the Smita Patil Award for her being an outstanding individual who has shown excellence for her in the Indian Film Industry. Other actresses who received the award includes Deepika Padukone, Kareena Kapoor Khan, Vidya Balan, Preity Zinta, etc. The internet can’t digest it!!!

But, wait! Even after working for years and sharing space with great actors, she is still criticized for her acting skills. The announcement of felicitation by the NGO has broken many hearts. The rage was taken on twitter and people questioned and trolled her for the same.

Katrina Kaif is getting the Smita Patil award for her contribution in Bollywood. Lets give @kamaalrkhan the RD Burman award for best singing

We can expect anything now…

Katrina Kaif to get Smita Patil award for acting. Wtf! What next? Rahul Gandhi to get Nobel Peace and KRK to get and Oscar? @Sarcasm_So

Gospel Truth of the Moment

Oops! What a reason for committing suicide!!!

#TigerZindaHai but main nahi after #katrinakaif receiving #thesmitapatilaward …
Why? Why??? 🙁

So guys, what do you think about Katrina receiving the Smita Patil Memorial Award. Do you think, she deserves it???Share your views on the same with us by commenting in the comments section below.

Day 6 Collections Are Out! Katrina Will Think Twice Before Signing A Movie Now !
5 Reasons Why Virat Kohli Is Better Than Sachin Tendulkar