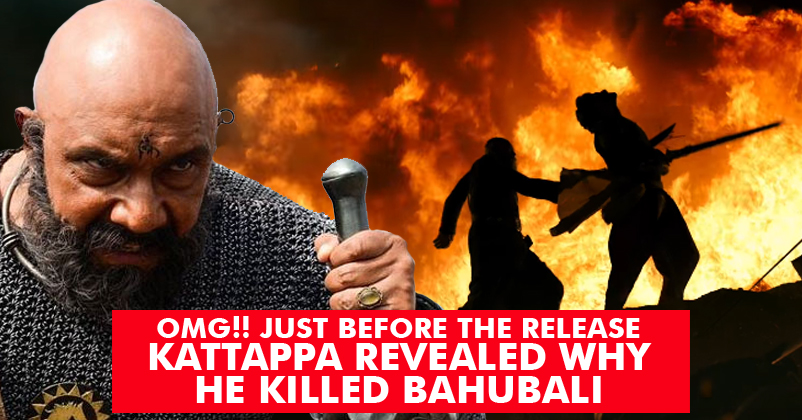 Baahubali 2: The Conclusion trailer has raised many eyebrows. We still don’t know the mystery behind Baahubali’s death in the part one of Baahubali. Well, the infamous question that the first part of movie left us with – Why did Kattappa kill Baahubali? is finally answered. Kattappa himself took the opportunity at the Baahubali event to address the audience and answer the question. The way he answered is applaud- worthy. Rightly said, wit and intelligence are either side of the same coin.

“It is very simple. Producers, Shobu sir, and Prasad sir paid me very well. And Rajamouli told me ‘Kill Baahubali’, so I killed him. Otherwise, how can I kill Prabhas? He has been my darling since Mirchi (their 2003 film together).”

As we all know that people are curious to know the story of Baahubali in the conclusion part, there’s also this wave of speculation that it was not Kattappa who killed Baahubali. The theory of this has become the favorite past time puzzle.

The movie has some larger than life cinematography, the star cast looks promising and the stunts are even better than the previous part. The director SS Rajamouli is a creative genius, whose work we can only appreciate and fall in love with.

If in case you missed the trailer, watch it here:

We are looking forward to the epic conclusion of Baahubali which will release in theatres on 28th April, 2017.

Continue Reading
You may also like...
Related Topics:Finally We Have An Answer!, Kattappa Reveals To Everyone Why He Killed Baahubali, Now We Have One More Funny Answer