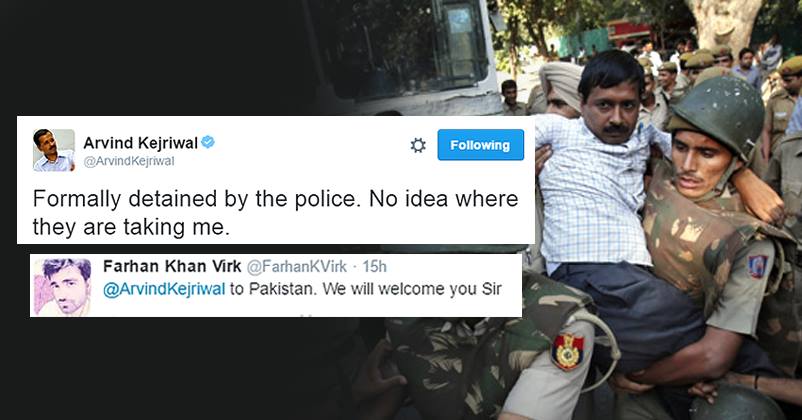 It was a high voltage day for Arvind Kejriwal. It all started when an ex-serviceman Ram Kishan Grewal committed suicide by consuming poison over the One Rank One Pension issue.

Arvind Kejriwal out of his habit again blamed the Modi sarkar.

The Delhi chief minister said that the Prime Minister Narendra Modi has lied about the One Rank One Pension (OROP) issue to the country. The day as it is, wasn’t in Delhi CM’s favor.

He soon got detained by the Delhi police in the R.K. Puram Police Station in south Delhi after he made attempts to meet the family members of the ex-serviceman who committed suicide.

The Delhi CM Arvind Kejriwal took the matter to Twitter when his car was surrounded by the police and he was not being allowed to leave. Take a look at what he tweeted at that moment…

Formally detained by the police. No idea where they are taking me.

This prompt act by Kejriwal appears as a pure attempt to gain attention and letting his followers know about his current condition. The last thing he would have expected were trolls.

But twitteratis find immense pleasure in trolling Arvind Kejriwal. His tweet got some hilarious replies by Twitter users.

After the Uri attack, we all witnessed that Kejriwal gained support from Pakistan when he questioned PM Modi regarding our first surgical strike.

to Pakistan. We will welcome you Sir

Another tip by the same…

Pro Tip: If they put you in Jail and if the gate is not locked, don't EVER try to run out of it.
Thok dete hain bhai..😂😂😂 https://t.co/YCtJOodIqZ

A few first-aid tips he got…

They're Taking You To Make Your Ration Card Maybe. Enjoy. 😉 #OROP @ArvindKejriwal https://t.co/srUxcsyv7k

What an answer sir ji!!!

:What difference does it make to you?Entire Delhi doesn't know where you are taking theam?Sort of "same to you":)!!

This one is the funniest…

Are Kejriwal’s allegations on Modi sarkaar correct? What are your opinions regarding the ex-serviceman’s suicide issue? Can PM Modi lie to his country regarding One Rank One Pension issue? Don’t forget to share your unbiased views in the comments section below!

Twitterati Trends #ModiInsultsArmy After Army Veteran Commits Suicide Due To OROP!
All These Tweets Against #OROP Have Ditto Wordings! What’s The Matter? Something Is Fishy…