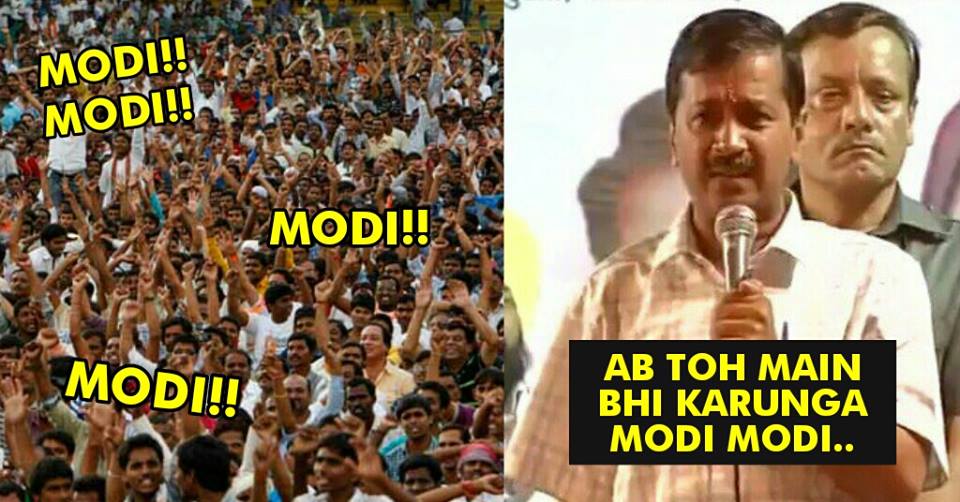 It seems people know Kejriwal’s weakness very well and try hard to put him in awkward situations. Something similar happened in his rally in New Delhi, but this time, Kejriwal had a befitting reply.

Well, the MCD elections are almost here and Kejriwal is busy campaigning for the same. As always, he had to once again face embarrassment during his rally in Gautam Vihar Chowk. Instead of supporting Kejriwal, some people started chanting PM Modi’s name. The Delhi CM must have expected “Kejriwal-Kejriwal”, but all he got was “Modi-Modi”, LOL. These slogans irritated him, following which he made a unique promise. Yes, he gave a ‘hatke’ reaction and it surprised everyone; instead of ignoring the slogans, Kejriwal said that he too will chant Modi’s name. However, the CM added that he will do so only if certain conditions are met. Confused?

The AAP supremo stated that he doesn’t mind chanting Narendra Modi’s name if it brings about positive changes. Kejriwal cited examples and explained that if chanting Modi’s name reduces electricity rates or exempts people from house taxes, he would happily do it.

People got to witness a completely different avatar this time; after speaking all this, Kejriwal chanted “Modi-Modi”, not once but twice. He also made people realize that raising pro-Modi slogans is nothing but madness.

Want to watch the video of this rally? Well, you have to control yourselves as it’s going to leave you in splits….

That was hilarious; if Modi brings about an improvement, Kejriwal will have no option but to fulfill his promise. How did you find the video?

Share your views with us in our comments section below.

Sushma Swaraj Once Again Proves That She Is A Savior, Saves A Woman From Committing Suicide
This Is How Blind Followers & Blind Haters Are Ruining The Nation, Time To Become Logical Thinkers