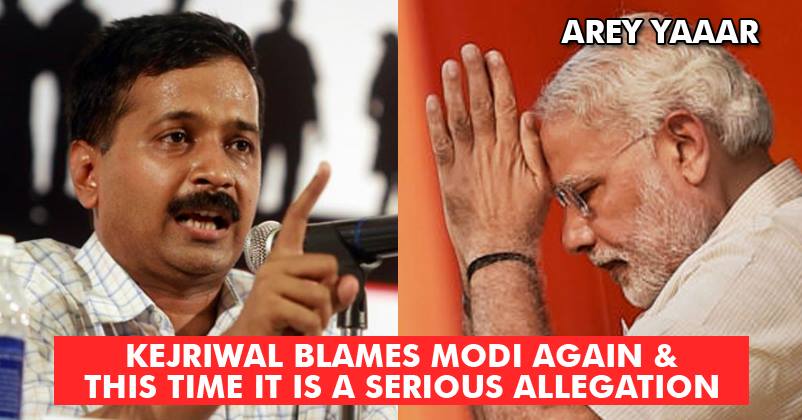 We all are familiar with how Arvind Kejriwal doesn’t leave a single chance to blame PM Modi. His allegations are baseless and have no meaning whatsoever, don’t you think so?

It is said that the Delhi CM’s morning starts with ‘Modi Modi Modi’ and ends with the same chant. Time and again, he takes to Twitter and trolls the PM. It seems Kejriwal has that ‘Modi obsession’ and he is just not able to get over it. Once again, he got a good chance to play the blame game. This time, it is related to the issue of corruption which popular comedian, Kapil Sharma has faced.

Couple of weeks back, there was a lot of controversy surrounding the bribery charges on BMC officials. Kapil had to pay a bribe of Rs 5 lakhs in order to get approval for his office in Mumbai.

He posted this incident on Twitter and also tagged Modiji, so that he could know the level of corruption that is prevalent in our country. Not only this, the comedian also questioned Modiji about his so-claimed ‘Achhe Din’. Obviously, this gave rise to a Twitter war, where on one side there were Modi fans and on the other side there were opponents of corruption.

All this put Kapil Sharma into big trouble. Yes, the issue of illegal construction work at his Goregaon flat was highlighted and an FIR was filed against the comedian under section 381-B of the MRTP Act. With so much happening around, Kejriwal got a good chance of blaming Modi. Here’s his tweet…

Kejriwal took a sly dig and Modi and said that whosoever will complain against corruption will have to suffer like Kapil Sharma. He means to say that under Modi Government, corruption would always be prevalent and no one has the right to raise his voice against it. As soon as Modi supporters saw this tweet, they lashed out at him and trolled him; have a look at the trolls…

This is the best!

So guys, what is your take on this? Do let us know in our comments section below.