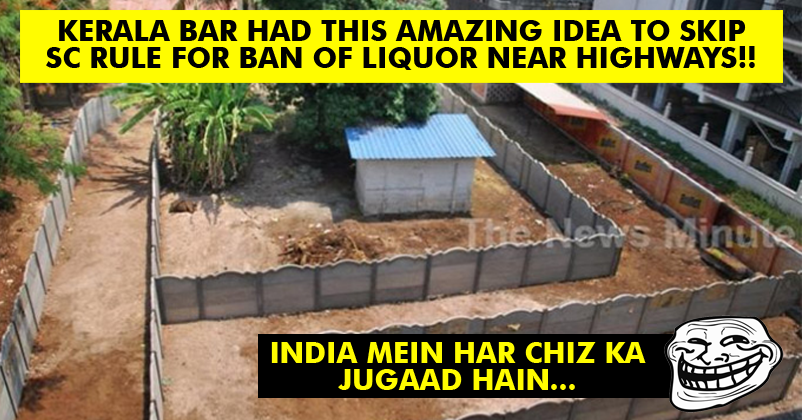 The Supreme Court of India gave a historical decision to curb road accidents on highways when it ordered an absolute ban on the alcohol shops which are situated within the distance of 500 metres from national and state highways, starting from April 1, this year. A majority of citizens praised this decision but it was a great setback for many state governments as it meant a considerable loss in revenue. While the Chief Minister of Bihar, Nitish Kumar, welcomed it with open heart as he already made great efforts to make his state a dry state, the CM of Goa, Mahohar Parrikar, wanted some relaxation in the order.

This order gave sleepless nights to many bar owners but as they say, ‘where there is a will, there is a way’; the owner of Aishwarya Restobar came up with a mind-boggling solution. Aishwarya Restobar is situated on National Highway-17 in Paravoor and the owner built a maze for increasing the distance by 250-300 metres. The total expenditure incurred on building this maze is around Rs. 2 Lakh but it has ensured that the bar is now officially 500 metres far from the highway. In the same manner, Cyber Hub, which has many pubs and restaurant-bars and is situated in Gurugram, Haryana, dealt with this problem by changing its entrance to increase its distance from NH 8 by one kilometer.

The governments of various states such as Uttarakhand, Rajasthan and Punjab are also not lagging behind and trying to exploit the loopholes of the order by doing the denotification of major state highways and asking help from the central government in denotifying the national highways which are passing through them.

Now it will be interesting to see how the SC will react but one thing that we must admit is that we Indians are too good when it comes to manipulating law. Agree? PM Modi And Sheikh Hasina Laughed Really Hard For Almost A Minute For This Hilarious Reason
Woman Promised Marriage & Then Backed Off! Accused Man Of Rape & Put Him Behind Bars For 8 Months!