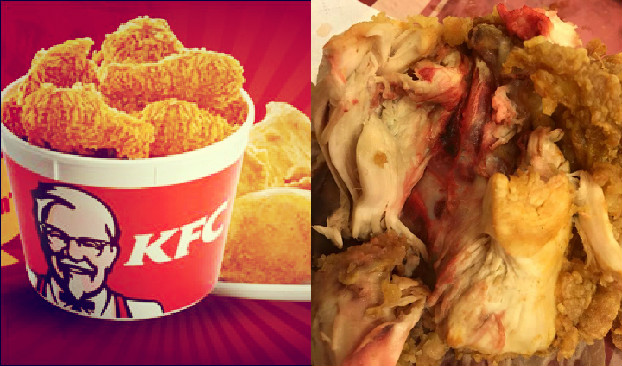 Multinational food joints have made a great business here in India but have failed to keep up with their brand name and in terms of maintaining quality food, they have failed miserably. This is surely not the first time that KFC has made such mistake, previously also there have been many reports of it using mutant chicken. The scenario is getting worsen everyday.

Recently, Vikas Grover who lives in Gurgaon had to face one such outing where the chicken that he ordered was completely blood stained. but when he asked the manger of the KFC Franchisee to accept their mistake in written letter, they flatly refused. The incident took place in a franchisee running in a mall at NCR. Vikas Grover also clicked the picture and uploaded it in Facebook to warn people. Don’t you think strict action should be taken against such companies?

BEWARE: If YOU RECEIVE THIS MESSAGE, Your iPhone Will CRASH
Deadly Delhi Heat Showed Anger & Didn’t Leave Roads Even, Watch How Cruelly It Melted This Road