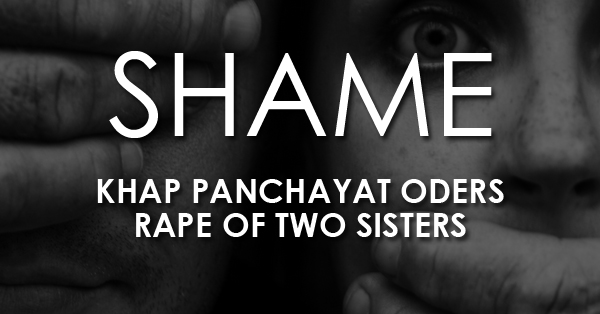 WHATS WRONG WITH THIS COUNTRY??? Yes this is the question you’ll be forced to ask yourself at the end of this post.

Where over half of the Indian Population is Happily Celebrating this very special day dedicated to one of the Most beautiful relations god has ever made, there is a shocking and a shameful news coming from Baghpat District of Uttar Pradesh. Two Sisters face an Inhuman decision of Khap Panchayat to be Raped in Uttar Pradesh.
A week ago where a girl in Delhi Falsely alleged that a Guy molested her just to gain fame and sympathy which costed the Guy his Job and today a Judgement of a Khap Panchayat in Uttar Pradesh had put the nation to shame.
Khap Panchayat in a small village of Baghpat District of Uttar Pradesh passed a shameful order which states that two sisters (23 Year old & another just 15 Year old) who belong to a lower caste, be raped and paraded naked as a Punishment for the crime committed by their Brother.

As per TOI , the brother of these two sisters had allegedly eloped with a woman who was married and reported to belong to a Higher caste.
So Khap Panchayat held that the Punishment for the mistake the Brother, should be borne by the Sisters and ordered that Sisters should be Raped. They have also ordered for the sisters to be striped naked and paraded in the village with blackened faces.
Supreme Court years ago had already declared Khap Panchayat’s to be Illegal but still there are many villages where Khap Panchayat take decisions for the good and bad of the people of their village.
Amnesty International stood against this decision and started a Campaign to sign a Petition called “TWO SISTERS TO BE RAPED AS PUNISHMENT – DEMAND JUSTICE”. This campaign was started requesting the authorities to intervene and take action against such Inhuman Khap Panchayat immediately. The petition had been signed by over 16000 people so far.

The question is when is the Injustice towards Girls end in India? When is that people will have equal feelings for all the people belonging to other castes. When will the authorities jump into such matters and stop such inhuman judgement made by good for nothing Khap Panchayats? Share your views on this news in the comment box below.

Shocking – Check Out How This MAN Gave Birth To A Baby Boy
SHOCKING : Doctors Treat A Dead Woman For 3 Days And Charged 1.10 Lakhs In Andhra Pradesh