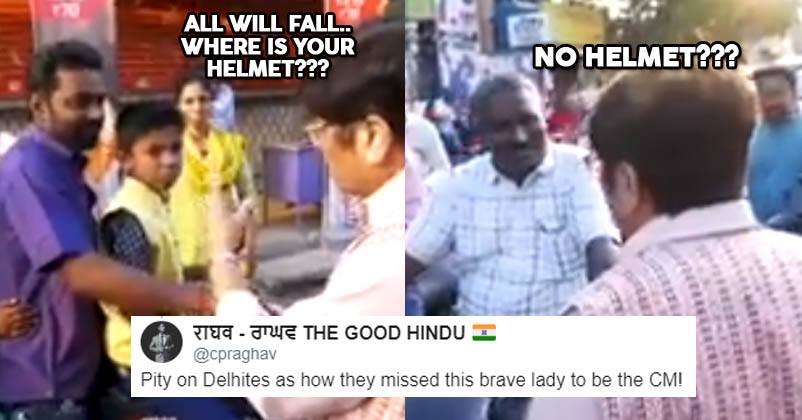 In India, a number of people get injured or lose their lives due to road accidents every year and majority of the cases are those in which people suffer head injuries. These fatal head injuries can be avoided if people wear helmets while riding two-wheelers but it is very sad that in our country, people consider it to be a mark of heroism to break rules.

The traffic police departments of many states have been working hard to make people aware about the road safety. Sometimes they take help of social media while at other times, they start campaigns on roads like the one started by the Delhi Police in which they are showing mirror and road safety placards to the law-breaking citizens.

The traffic rules are getting broken in Puducherry also but the citizens didn’t have an idea that they will be meeting an unusual cop on February 10. The Ministry of Road Transport and Highways conducted a road safety week from February 4-10. The Governor of Puducherry Kiran Bedi who used to be a cop took to road of the Union Territory and educated people about the need of wearing helmets and following other traffic rules. 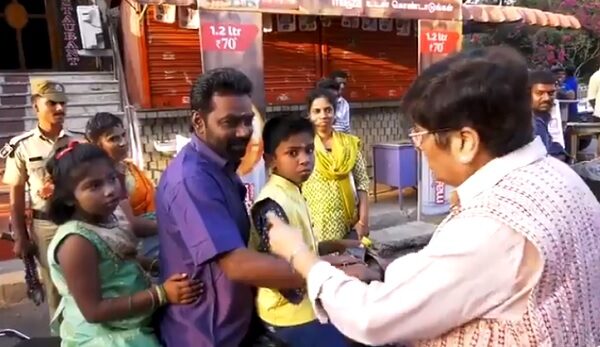 She shared a video on the micro-blogging site Twitter with caption, “When there’s no culture of wearing a helmet in Puducherry and its CM keeps stalling enforcement & every 3rd day there’s a fatal accident, due to non wearing of a helmet, where does one begin? Give up or take it in one’s own hands as well, alongside challenging enforcement agencies?”

When there’s no culture of wearing a helmet in Puducherry and its CM keeps stalling enforcement & every 3rd day there’s a fatal accident, due to non wearing of a helmet,where does one begin?Giveup or take it in one’s own hands as well,alongside challenging enforcement agencies? pic.twitter.com/VQAUbYgUdU

Kiran Bedi also criticised the chief minister V. Narayanasamy for obstructing the law enforcement despite the fact that every third day, a heavy accident takes place.

Who does not know that wearing a helmet is in their interest?
This enforcement has been obstructed by the CM since last year. Every time enforcement picks courage the CM obstructs.
While a scooterist dies every third day on the roads of Puducherry…https://t.co/3b8FNkTqR6

Not only this, she also slammed the elected representatives who are protesting against the rule of wearing helmet and disrespecting the judgments given by Supreme Court and Madras High Court.

Held a review meeting with senior police officers. Reminded them that we r law enforcers & duty bound to uphold the law and work for the safety of the people. We r duty bound to ensure Rule of Law.
All public officials appointed or elected r equally responsible to uphold d Law. pic.twitter.com/devHvezrIz

Twitter users were all praise for the cop turned Governor. Here are some selected reactions:

Wonderful! You never fail to impress or enforce! Compliments & Kudos 👍👏👏

I salute #kiranbedi for her sense of duty and the efforts she puts in .#Manikarnika in action.If only we had more like her.

Wow!! Maam…where else can you find a Governor enforcing traffic rules…these ppl forget that you are an ex-cop! 🙂

You transformed Tihar, Maam…Pondi will benefit greatly with your presence. 👍👍🙏🙏

Pity on Delhites as how they missed this brave lady to be the CM!

While this is not your job,stepping out&caring 4 public is quite https://t.co/EhQgf3AMCt enforce laws which are 4 public safety are not being followed or respected by the elected is very sad.#Politicians shd not interfere in such cases. Its 4 the people, they understd or not!

Some more like you, n a good change is evident. You are an example for people in positions who can make diff bt they chose not to do it..

I am missing you Dear Mam in Delhi. I still confused why #Delhi elected a frustrated self-command honest #कलयुगीहरिश्चंद्र @ArvindKejriwal as a CM.

we want you in delhi madam, to control the crime rate,…. Law enforcement is the key concern these days. Law defaulters are escaping in the name of democracy and freedom..@KapilMishra_IND @TVMohandasPai @rishibagree

It is rarely seen that a governor stand on road for public safety, heads of to you mam 🙏🙏
Aap governor bn gyi but aapke ander se Ek IPS officer nhi nikla ,good to see…. Other politicians must learn this kindness from you

At least the governor cares, if not the CM and government.

Kudos to Kiran Bedi who is a great source of inspiration for millions. The country needs more such people like her!

This Man Found A Used Bandaid In Food Ordered From Swiggy, This Is How Swiggy Responded To It
This Woman Ended Up With Paan Spittle On Her Dress As She Waited At Dadar Station, This Is Disgusting.