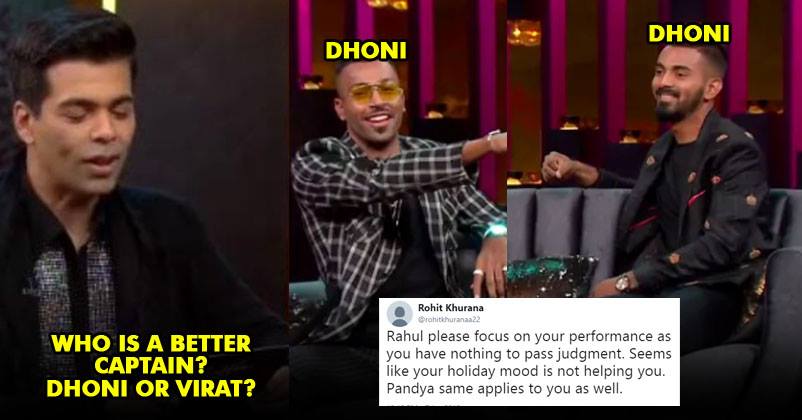 In the most controversial Koffee With Karan episode, which aired on Sunday, Karan Johar had two young cricketers, Hardik Pandya and KL Rahul on the show.

During the rapid fire round of the show, both men were asked who according to them was the better captain – Dhoni or Virat Kohli.

Hardik Pandya said that since he had made his debut under Dhoni, he would choose Dhoni as a better captain. Rahul judged in terms of achievements, and answered the same.

This has Twitterati divided in their opinions, because while some fans feel that this is true, some feel that the boys were wrong in not selecting Virat.

Tune into Star World now to watch two careers about to go down. Apparently, both KL Rahul and H Pandya named Dhoni as the best captain and not Kohli. #KoffeeWithKaran

Rahul please focus on your performance as you have nothing to pass judgment. Seems like your holiday mood is not helping you. Pandya same applies to you as well.

Some supported the answer:

Obviously !! He is best

@msdhoni is the reason India cricket is where it is today – confident, aggressive, fit and passionate cricketers who sledge back!