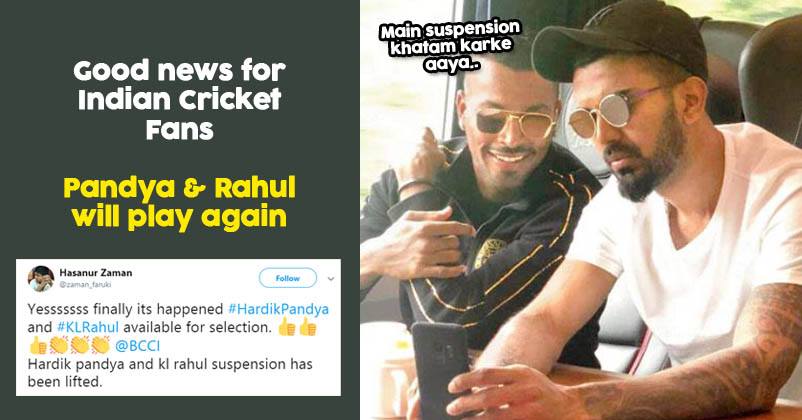 The ban on Hardik Pandya and KL Rahul has been lifted with immediate effect, and they have been cleared for matches.

The two are no longer suspended, pending the appointment and adjudication of the charges by the BCCI Ombudsman. Rahul and Pandya had been banned from upcoming matches by the BCCI following their derogatory and offensive comments on Koffee With Karan.

However, the inquiry is to continue, although their suspensions have been lifted. This decision has been welcomed by the Indian fans and the entire cricket fraternity.

BREAKING: Suspension of @hardikpandya7 & @klrahul11 lifted by COA on advice of new Amicus Curiae P S Narsimha pending appointment of and adjudication on allegations against the players by BCCI ombudsman who is yet to be appointed.

Finally end of the bizarre controversy.
High time, they focus on getting back in the team.

Welcome move by @BCCI to lift suspension of #HardikPandya & #KLRahul, can go as replacement for @imVkohli for 2nd half of #INDvsNZ tour, this will help them grow as a better human being & also to b diplomatically correct, when speaking in public @hardikpandya7 @klrahul11

#HardikPandya Irony is, people who were asking for their lifetime ban are now welcoming this decision….waah….

Step in the right direction. Indefinite suspension, after they had missed out on the ODI series v Australia, was an overreaction and grossly unfair considering the nature of the transgression

Gr8 news now send them to NZ by first available flight …@BCCI @imVkohli @RaviShastriOfc …Let they play ….They are enough punished and humiliated for their childish statement !!

The question now will be would @BCCI send them to NZ for the odi series? Certainly @hardikpandya7 shud board the next flight!! #NZvIND

The Committee of Administrators lifts the suspension on Hardik Pandya and KL Rahul..

Good call by the COA and the new amicus. Suspension lifted pending probe. Rahul and Pandya can start playing with immediate effect.

Rohit Sharma Posted Adorable Picture With Wife, But Yuzvendra Chahal Ruined It With Hilarious Comment.
England Cricket Trolled Itself After Team Got All Out For 77. Twitter Flooded With Hilarious Memes