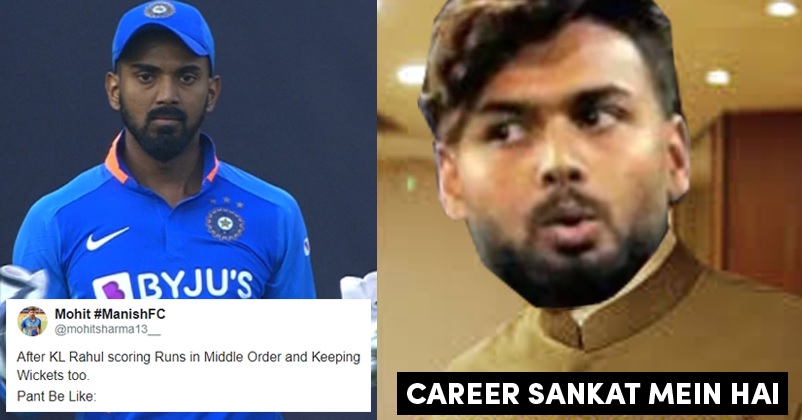 The Indian cricket team performed pretty well against the Australian team as the former won the recently concluded three match ODI series by 2-1 even after getting a crushing defeat in the series opener. Presently, the Indian team is in New Zealand where it will play its first T20 match on January 24 (today).

MS Dhoni has not been a part of the squad for a long time and his last match was the semi-final of World Cup 2019 which India lost to New Zealand. Since then, the young wicket-keeper-batsman Rishabh Pant has been given many chances to prove his worth but despite getting a number of opportunities, he has failed to make any impression. He has not only failed as a batsman but also as a wicketkeeper and now he has become a favourite target of the online trollers.

Still BCCI is not in the mood to give enough chances to Sanju Samson, another Indian wicketkeeper, to prove his mettle as some officials have a belief that Rishabh Pant is a special player. However, now it seems that team India and its skipper Virat Kohli has found a solution to the problem.

KL Rahul, the Indian cricketer, is in a superb form as he averaged 45.50 (T20s) and 47.86 (ODIs) in the last year and performed great in the recently concluded India-Australia series as well. What makes him more important for the team is the fact that he is ready to bat at any spot as per the requirement of the team, whether it is the fifth spot, third one or even opening.

After Rishabh Pant suffered concussion, it was KL Rahul who kept the wickets for India and he performed quite well in that role too. Presently, he is being considered for keeping the wickets in the New Zealand tour as it will provide an option to the team to include one more specialised batsman.

The Indian skipper Virat Kohli has already made it clear that KL Rahul will be keeping the wickets in the series opener, adding that it will give more balance to the team as one more batsman can be included in the team.

However, this can be an alarm bell for Rishabh Pant who has enjoyed being in the team for quite a long time despite forgettable performances both with bat and wicket-keeping gloves.

Twitterati has trolled Rishabh Pant in an epic way as they are telling him that his career is not safe now. Here are some hilarious tweets:

After KL Rahul batting at no. 5 and impress everyone with his Wicket Keeping skills.

Not a meme just a deep thought of rishabh pant about Kl Rahul pic.twitter.com/Q1zKTu2pz2

Heaven For Prithvi Shaw Fans now. He will open with Rohit Sharma in ODI's and KL Rahul will again bat at 5.
Rishabh Pant be like – pic.twitter.com/1PQjLKlb9P

@BCCI posts @klrahul11 practicing keeping the stumps and to keep during #INDvNZ series .

After KL Rahul scoring Runs in Middle Order and Keeping Wickets too.

When pant thinks Kohli will always back him even after poor DRS call , mediocre keeping and average batting.
(Kohli after getting wicket keeper batsman KL Rahul )Kohli to Pant- #ShubhMangalZyadaSaavdhan pic.twitter.com/V1k4jJnwL9