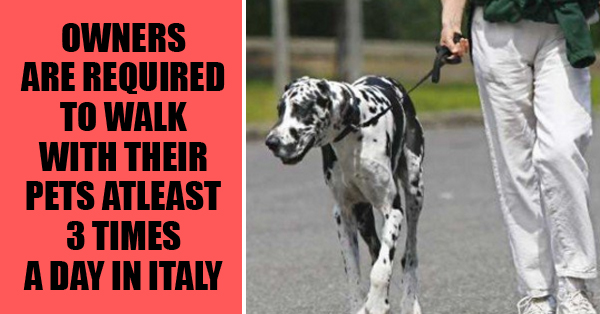 There are various pet laws around the world, which actually helps to protect the animals from cruelty and other harms. Fortunately, pet laws are developed around the world which ensures the betterment of these creatures. Have a look at them.

It is illegal to tie a dog to the roof of your car. It is illegal for cat to sleep in a bakery because they focus on hygiene more than canine love. Police officers in Paulding country can bite a dog to calm down them. You are not allowed to photograph rabbits in between January and April. Cats there can be only taken on the street if they are on the lead. Owners of dog are legally required to walk with their pets at least three times a day. Keeping goldfish at home is considered cruel in Italy. People must pass written as well as oral test before they are allowed to own a dog. It is illegal for a cab to carry dogs with them. But if it was mandatory, you need to walk with them! Men are prevented by law from walking with dogs in Saudi Arabia. Continue Reading
You may also like...
Related Topics:Know About 10 Of The Most Strange Pet Laws Around The World