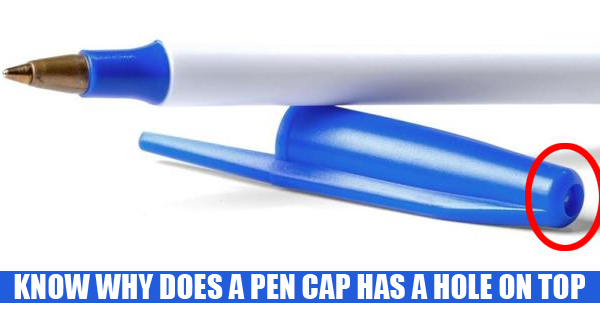 We hardly raise questions on things we use in our day to day life. One of it is PEN, Yes! A Ball Pen. You might have never questioned as to why there is a tiny hole at the end of a pen. Probably if you’d have questioned it, you might have thought that its purpose is to dry ink faster.
Well, it really isn’t false, the tiny hole at the end of the pen do contributes to dry the ink on the pen’s nib. But this is not its really made for. Infact, the real reason behind the tiny hole at the end of the pen’s cap can be largely said as a genius idea.

Actually, the concept of including a small hole at the end of pen was brought by Bic Cristal who is one of the oldest ball point pen makers. The makers noticed that children tend to swallow pen caps more often which caused them to choke and proved to be life threatening. The makers decided to bring a design change in pen’s cap so that even if it is swallowed and stuck in air passage. The hole in the cap would let the air pass through.

So, with this smart thinking, the big chewer of the pen van still remain alive and learn the lesson of not chewing pen’s cap again.

So, did you know the real reason behind the hole in the pen’s cap?. Do you know anyone who choked on to pen’s cap? Do let us know in the comments section below.

Continue Reading
You may also like...
Related Topics:Do You Know Why Pen's Cap Have Tiny Hole At The End? Here's Why!

Sony’s Talent Hunt Director Slammed For “NO Muslim Models, They Could Be TERRORIST” Remark
KRK Trolled On Twitter For Making A Racist Remark About South Indian Actors