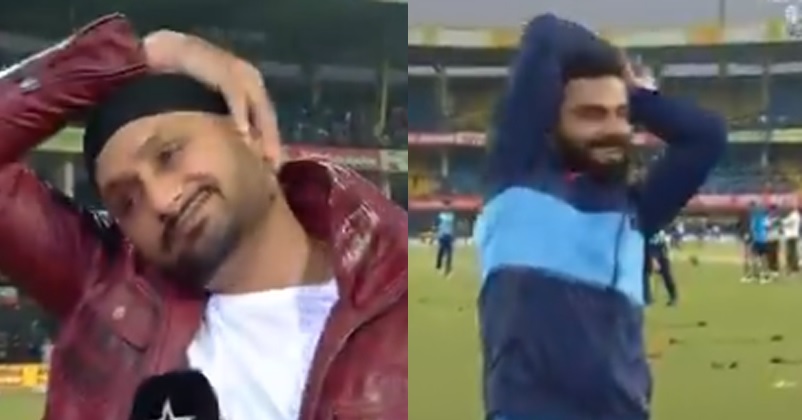 Virat Kohli, the skipper of the Indian cricket team, is quite an aggressive player but he also has one talent which is not known to many people. He is pretty good in copying or imitating other people as recently, he imitated the bowling style of Indian spinner Harbhajan Singh and also showed how Bhajji reacts when he doesn’t get a wicket.

It happened during the practice sessions before the second T20I of the series which was played between India and Sri Lanka in Indore and was won by India comfortably.

Irfan Pathan, Yuzvendra Chahal and Harbhajan were also present at the moment when Virat copied the Indian spinner. Bhajji who is also known as Turbunator took it in a good spirit and also praised Kohli for getting perfect reaction which he gives in disappointment when he doesn’t get the wicket.

The hilarious video was shared by Star Sports with the caption,

“Who was @imVkohli imitating here?

Wrong answers only in the replies, GO!”

Who was @imVkohli imitating here?
Wrong answers only in the replies, GO!

Twitterati loved Virat’s act and this is how they praised him for being multi-talented:

Hahahah virat was damn good here!! He also imitated yuvi once it was hilarious too😂😂

Harbhajan is presently out of the squad but he is one of the best spinners that India has ever produced. It was 2017 when he played for the country but he is still very active in the Indian Premier League and domestic cricket.

Considering the fact that age is not by his side, it is pretty impossible for him to make a comeback in the national side but he will always be loved for his wonderful bowling.

What do you think of Virat’s imitating act? Let us know your views.