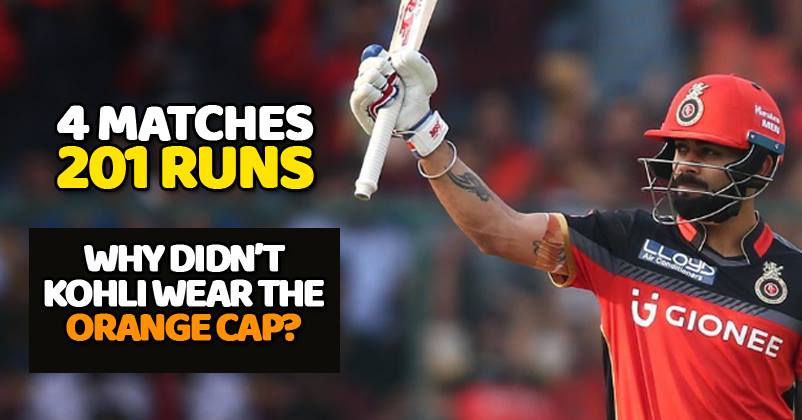 Mumbai Indians tasted first victory in IPL 2018 when they defeated Royal Challengers Bangalore on Tuesday night. The match was won by MI by 46 runs as they gave the target of 214 to RCB but the latter could afford only 167 for the loss of 8 wickets. Rohit Sharma played the captain innings of 94 runs and he was well supported by the other batsmen too.

However on the other side, the skipper of RCB Virat Kohli also performed brilliantly and remained not-out for 92 but didn’t get support by other batsmen of his team. With this innings of 92 runs, Virat surpassed Suresh Raina and became the highest run scorer of IPL. He also earned the “orange cap” as he became the leading run getter of this season.

However, many were shocked when he said that he didn’t feel like wearing the orange cap because his team lost the match and his personal achievement didn’t matter at the moment.

“It was a good game of cricket as far as Mumbai were concerned. I don’t feel like wearing this (orange cap) right now because it really doesn’t matter. We got off to a great start but we just threw it away, and need to reflect on our dismissals. We knew there would be a little bit of dew, we needed not your 40-45s but 80-85s.”

RCB started well but Mumbai Indian bowlers were successful in taking wickets at regular intervals and it was Virat only who was fighting a lone battle. He tried his best to keep a check on the run rate as he said,

“In the end it was all about making sure that the run-rate doesn’t take a hit; credit to Mumbai though, they bowled really well. We didn’t get any chances, we bowled in the areas we thought were good but they counter-attacked well.”

He also praised Mumbai Indians and the team’s skipper Rohit Sharma for a fanstastic performance. In his words,

“When you have your backs against the wall you do come out with a performance like this and that’s what they did. Even after they were two wickets down they showed resilience like good teams do. We tried our hardest but we just couldn’t get wickets in the middle stages.”

We wish Virat Kohli all the best for the remaining matches of IPL 2018.

RCB Lost One More Match. Twitter Is Trolling The Team Left & Right
Shahid Was Asked To Leak A Bedroom Secret. This Is What He Replied