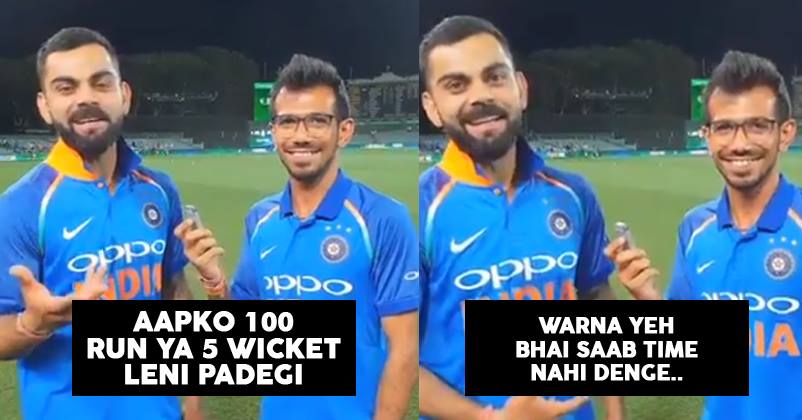 The Indian cricket team leveled the ODI series against Australia by 1-1 after winning the second ODI that was played at Adelaide. In the match, skipper Virat Kohli led from the front and scored a century. With the help of Virat’s century, MS Dhoni’s unbeaten half-century and a supporting cameo of Dinesh Karthik, team India achieved the target of 299 in the last over of their innings. Virat Kohli was adjudged man of the match for his brilliant knock.

There is no doubt that every talk show host will like to have Virat in his show but after Hardik Pandya and KL Rahul’s episode (in Koffee With Karan), we don’t think that Kohli will be in the mood of attending any talk show. However, he became part of one talk show and not only talked frankly but also enjoyed being there.

We are talking about Indian cricketer Yuzvendra Chahal’s talk show that has been titled as Chahal TV. Just to inform, BCCI has come up with this idea in which Chahal interviews the Indian cricketers after the match.

Rohit Sharma attended the show after the first ODI in which he scored a century and after the second ODI, it was Virat Kohli who was the guest on Chahal TV.

Kohli talked about many things including his 39th century, former skipper Dhoni, etc. but an element of humour was added when he said that the standards of this show are very high and only that player will be invited who has either taken 5 wickets or scored a century otherwise Chahal won’t give time.

In our fun segment, we get the Indian captain talking about his 39th ODI ton, the @msdhoni finish & a lot more – by @RajalArora

We must say that Kohli is excellent not only on the field but also when it comes to humour. What do you say?