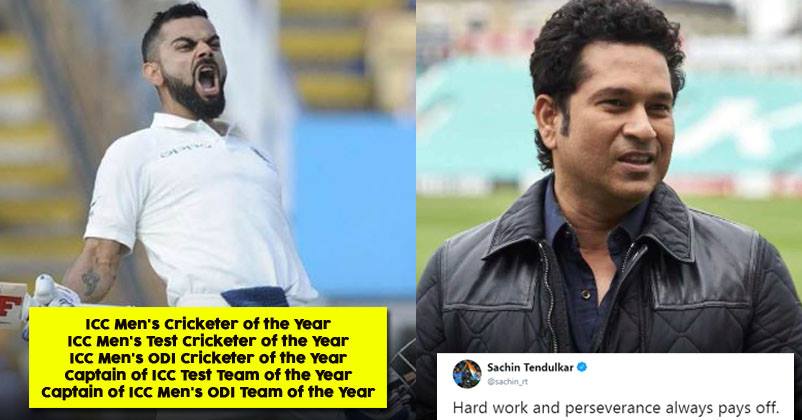 Virat Kohli, skipper of the Indian cricket team, has once again proved that there is no one as talented and dynamic like him in the world cricket and all those who have been calling him “Greatest of All Time”, i.e., G.O.A.T. are absolutely correct.

Virat had a great 2018 and 2019 also started wonderfully with historic series win over Australia and now he has won all the major awards of the ICC Awards 2018. These awards have been announced on Tuesday and Kohli has become the first cricketer to win ICC’s Test and ODI player of the year awards. He won not only Sir Garfield Sobers Trophy for ICC Cricketer of the Year but also ICC ODI Player of the Year and ICC Men’s Test Player of the Year.

The Indian skipper has also been chosen for leading the Test and ODI teams of ICC for the year 2018. The fans of Virat Kohli have gone crazy and the celebrations have started by giving him the title of “King Kohli”.

This is what ICC tweeted:

India’s superstar @imvKohli wins a hat-trick of prizes in the 2018 #ICCAwards!

Sachin Tendulkar also praised Kohli and wrote, “Hard work and perseverance always pays off. Congratulations on winning a hat-trick of awards at the #ICCAwards announced today, @imVkohli! Very proud of your achievements.”

Hard work and perseverance always pays off. Congratulations on winning a hat-trick of awards at the #ICCAwards announced today, @imVkohli! Very proud of your achievements. https://t.co/WECKac3ne9

Check out some reactions from his fans:

Virat Kohli trying to fit in all the awards he won in of 2018. #ICCAwards pic.twitter.com/zmqfRq4MUv

ICC Cricketer Of The Year

ICC ODI Cricketer Of The Year

ICC ODI Captain Of The Year

ICC Test Cricketer Of The Year

ICC Test Captain Of The Year

ICC Captain Of The Year

This 83 Year Old Man Bought 55,000 Designer Gowns For His Wife, The Reason Will Surprise You
Swachha Bollywood Abhiyaan: Poll For The Worst Bollywood Performances Starts Now