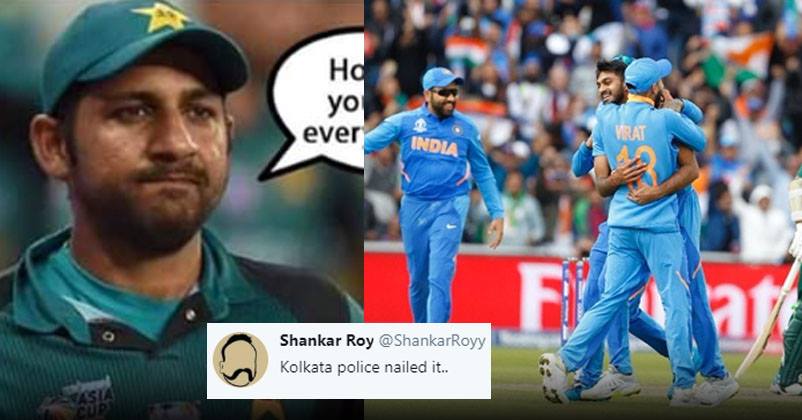 The people of the two neighbouring countries India and Pakistan was stuck right in front of their television screen to witness the majestic ICC World Cup match between India vs Pakistan at Old Trafford.

India smashed their neighbouring country Pakistan and defeated the rivals by 89 runs through DLS at Old Trafford. India scored a total of 336 runs for 5 wickets that include the magnificent innings of Rohit Sharma’s 140 runs, Virat Kohli scored 77 runs and KL Rahul made 57 runs along with Hardik Pandya’s and Kuldeep Yadav’s magnificent spell dominated the rival team for the 7th consecutive time in the World Cup history.

Indians all around the globe are busy celebrating the victory of the home team over the arch-rivals. Everyone is busy congratulating the men in blue. However, Kolkata Police also congratulated team India over the destructive victory. A meme was shared from the official Twitter handle of Kolkata Police. The picture wrote, Sarfaraz is seen asking “How do you win every time?”. Kohli replies “I am not supposed to tell you that”.

Desi Twitter is praising the witty humour of Kolkata Police. Here are a few tweets:

Kolkata Police has a witty sense of humour!