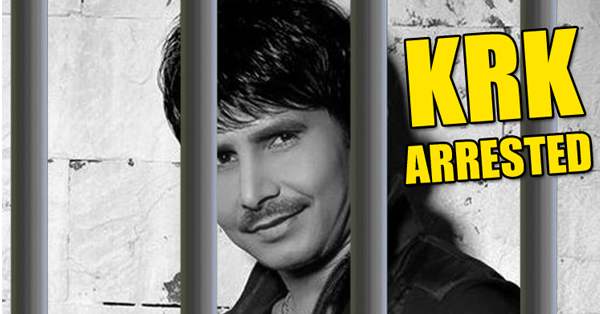 KRK is in the news once again for his ridiculous yet offensive behavior. As we all witnessed, India couldn’t make it to the finals in the World Cup Series and the blame game is going on.

Blaming the Indian team was ok, but blaming Anushka Sharma for the loss, is beyond madness.

This Was Really Bad

This man never stops from speaking kachra about others without looking inside his own girey-baan. Our very own reporter Babban bhai refused to cover this news saying “Aise logo ka kya kare, inki jagah to gatar me bhi nhi hai, toh mere news me kaha se hogi”

KRK jee apni bakwas apne tak nhi rakh pate because he is so short that his body expels shit from his mouth easily and quickly. And now he is in jail for asking fans to pelt stones at Anushka Sharma’s house.

We requested our reporter Babban Shah to go to the police station and interview Mr. Kamal Rashid Khan. On request he went there and saw KRK crying. “Can you tell us about the whole incident in your words?” asked Babban.

“Kya KRK ki galti itni badi hai ki usey itni badi saza mile? Is he that guitly a person?” asked Shukla Sir when he got to have his say.

“KRK ko azad karo, Azad karo ji azad karo” people were heard chanting this on the streets, while other groups were heard saying “KRK ko Faansi do, Faansi do Faansi do”

Do you support KRK or do you not? Do you want KRK to be released from Jail or he should stay in Jail? Leave your comments below and let us know.

Hollywood Superheroes In Desi Avatar!
16 Images That Prove Why Our Generation Is The Coolest!