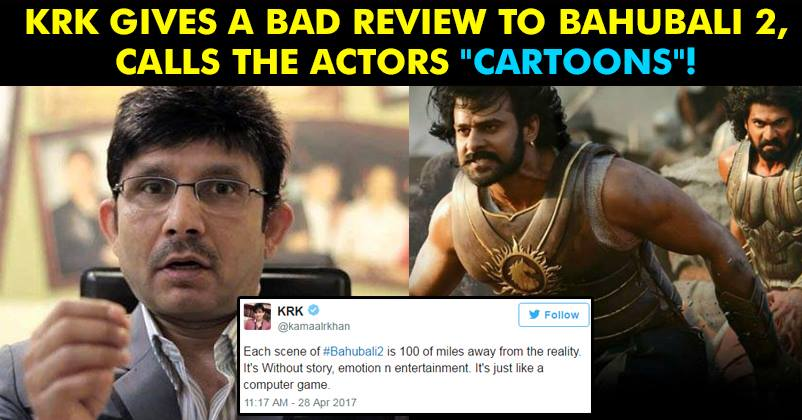 Love him or hate him but you just can’t ignore him! We are talking about KRK, the self-proclaimed critic who is quite active on Twitter and this doesn’t actually need to be mentioned! However, the noteworthy point here is that he keeps on seeking opportunities to thrash popular celebs and their movies by means of his insensible tweets and once again, he has done so!

Even though people wait for genuine reviews of every movie, review by KRK is also much awaited by Twitterati. So he’s back with the so-called best review of Baahubali 2 and all the fans of the film will slam him brutally after reading the crap he wrote on Twitter. KRK took to Twitter and condemned Baahubali in harsh words, calling Rajamouli a ‘chutiya director’. Not only this, he went on to the extent of comparing Prabhas & Daggubati with cartoons. In the first tweet, he compared Prabhas and Rana Daggubati with cartoons, “Sir @ssrajamouli Sahi Chutiya Kata Public Ka! What the fuck is this sir? I came 2theatre 2watch film, not cartoons in the name of #Bahubali2”

KRK called S. S. Rajamouli a “chutiya director” in his second tweet when he wrote, “What a Chutiyapa, Wahiyat, crap, headache film #Bahubali2! What a direction sir @ssrajamouli! You deserve award of chutiya director of 2017.” He went on to describe Baahubali 2 as a computer game in his third tweet, “Each scene of #Bahubali2 is 100 of miles away from the reality. It’s Without story, emotion n entertainment. It’s just like a computer game.”

Last but not the least, KRK alleged that if the director of Mughal-E-Azam watched the movie, he would have shot S. S. Rajamouli. He tweeted, “If director of film Mughal-E-Azam great K Asif Sahab could have watched #Bahubali2 so he could have gone to @ssrajamouli house to shoot him.”

Below is RVCJ’s review by public straight from theatres!

What is your take over KRK’s tweets? Share your views in the comments section below.

Love Raps? This Awesome Rap Is All You Need If You Are Fed Up Of Honey Singh & Badshah
Twinkle’s Instagram Post On Arnab & His Letter Writing Proves Her Excellence At Sarcasm