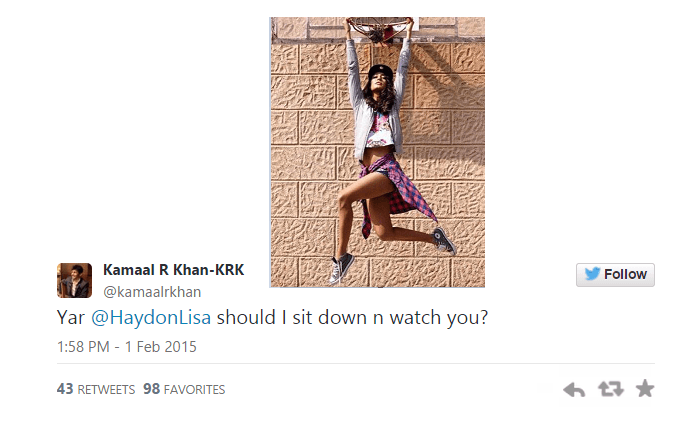 Kamaal R Khan-KRK is one such character who loves to troll on Social media but this time his troll was senseless and cheap to which Lisa Haydon replied sensibly.

KRK has been in news lot many times for wrong tweets. Recently we saw him fighting with Sonakshi Sinha over twitter & once again he took a fight with another women. This time with much more disgraceful & cheap comment.

Comment might sound funny but this shouldn’t have been done on social media in front of 1 billion people. Here’s how it all started. Lisa on 1st Feb posted below pic on her twitter account

Been working on this dunk thing for a while… @stepathlon by @TarasPhotograph pic.twitter.com/wF61dmd8dg

To which KRK shamelessly replied:-

Lisa isn’t that kind of girl who will listen nonsense against her and she made a fitting reply to KRK to which KRK actually had no answer. Have a look at reply of Lisa Haydon:-

Ive been told it doesn't get much lower than you @kamaalrkhan Still need a chair? #LowLife

KRK got offended but instead of deleting the tweet, he thought of taking it to another level as he likes to stay in limelight. He made some back to back tweets to which Lisa didn’t bother to reply & ignored him like he is non-existent for her:-

Atlast KRK stopped but this comment from KRK wasn’t cool as it was against a women. Let us know your views about this Twitter war between KRK & Lisa Haydon in comments section below.