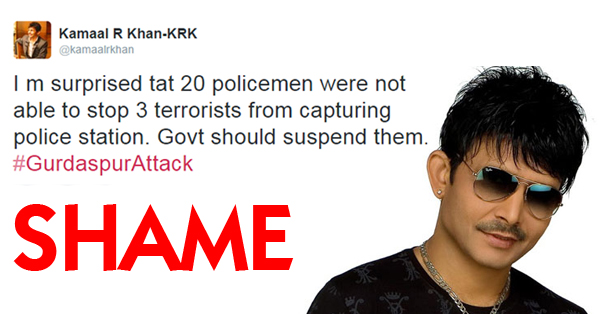 27th July 2015, for many Monday morning didn’t start off the way they wanted. Earlier in the morning around 6 Terrorist in an army uniform who are believed to have sneaked in from the neighboring country Pakistan were on a mission to break the peace in a small town of Punjab. The terrorist are said to have attacked a Bus carrying passengers & a Hospital before attacking Police Station. Reports suggest that 7 people including SP of Police & three other Constables & 3 Civilians have been killed. The battle between the two continued for around 10 Hours in a row & finally all the terrorists have been killed by 5:30 in the evening.
Indian Army from Pathankot & SWAT joined Punjab Police to successfully breaking down & killing all the terrorists hidden in the police station.
Where all these were going on and entire nation was praying for the Indian Forces & in the end congratulated the forces & appreciated the combined efforts of the Forces to kill the terrorists, there was one guy who was constantly on a mission to defame India & put the victory to shame.
Yes no other person in India could be so mad to speak about our own army other than the sick minded KAMAL RASHID KHAN aka KRK.
KRK lost it completely this time. While the Indian Forces were struggling to get the terrorists without any casualties this guy was making fun of them. Read the tweets he made during the battle.

There were couple of tweets which he deleted facing strong reactions from people on his twitter account. This is shameful on his part talking absolute nonsense about Indian forces. Whatsoever But, he has gone too far this time. He should watch out his words while talking anything about Indian Army. What do you think? Share your views about in the comments section below.