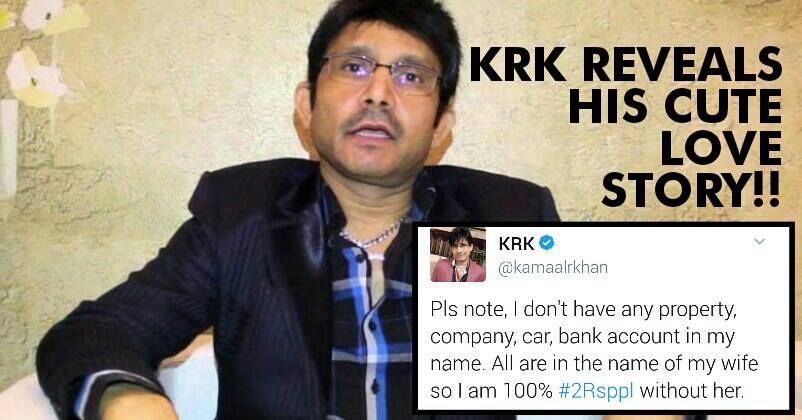 Kamal R Khan (KRK), who considers himself to be a critic has been the centre of attention for different controversies. He has been accused of making derogatory caste-based remarks and defamatory remarks against various movies and actors on multiple occasions. KRK has a massive fan base on the micro-blogging site Twitter; yes, he has 4 million followers. He keeps entertaining his fans and people love to make fun of him; he somehow manages to be trolled almost every time he tweets something.

KRK rarely talks about his personal life and he has frequently come across many people asking about his love life. But he never talked about it, until recently, when he decided to open up and share his inside story with the world.

The self-proclaimed critic recently published a series of Tweets where he talked about his love life and shared some unknown information about his family. KRK said that many people asked him about his wife and his love life. So he went on to give them the details.

He said that he met his wife for the first time in Mumbai Santacruz with her father. Somehow, he managed to get her phone number and reached out to her. At the beginning, his wife thought that he was trying to flirt with her and responded by shouting at him. He further added that his wife hated Muslims anyway. In his third tweet, he said that it took him over one year before he was able to convince his wife to marry him. According to him, his wife wanted to be sure that he loved her and didn’t consume alcohol. He also added said that they are happily married now and he also mentioned that he helped her brothers who live in Dubai, with their family.

Speaking about his siblings, he said that he has never taught them anything about religions and focused more on humanity. He said that he is confident that his children will never do anything wrong in their life.

In his 6th tweet, he left a piece of advice for his followers. He said that one should never ask for a single penny from their in-laws. I personally agree with this one.

In his final tweet, he said that he doesn’t have any properties and all of them are in the name of his wife.