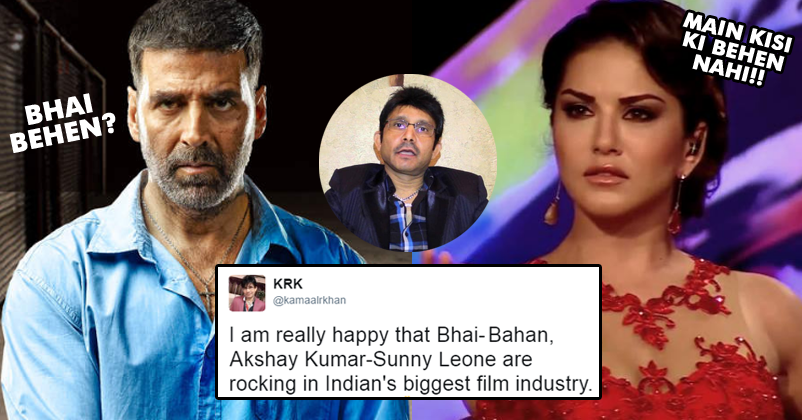 Sometimes, there is no choice but to read KRK’s tweets; he keeps spamming Twitter with his weirdest tweets, only to get hateful comments in return. He has not even spared the biggest of Bollywood celebrities; be it his sexist remarks for famous actresses or be it his typical negative movie reviews, we have tolerated it all. This time, KRK has gone way too ahead and has created a new bond between Akshay Kumar and Sunny Leone; no it’s not what you are thinking. He has said that Akshay & Sunny are brother-sister because the duo has Canadian citizenship. His logic as strange as him, agree?

Not only this, Kamaal Rashid Khan couldn’t stop taking a dig at Akshay Kumar for holding a Canadian citizenship. It all started with a picture of Akshay sitting with PM Modi.

Check out KRK’s series of tweets; your blood will boil seeing the very first tweet, especially if you are an Akki or a Modi fan.

“Akshay- Sir I am a Canadian citizen so I visit Canada frequently.
Modi Ji- Lol! I visit all the countries frequently on tax payers money.”

He went on an on!

And after seeing his tweets, here’s how Twitter reacted!

Look at this Indian!

And look at this indian who has done nothing as compare to Akshay Sir for this country, So we don't need you to tell us about anyone

There’s no end to KRK’s meaningless tweets, don’t you think so?

Ever Thought What The Ticker Below The Score In IPL Means? Read What It Means!
Someone Said AbRam Is Aryan’s Child From His GF In Romania! SRK Slammed Rumors Like A Boss!