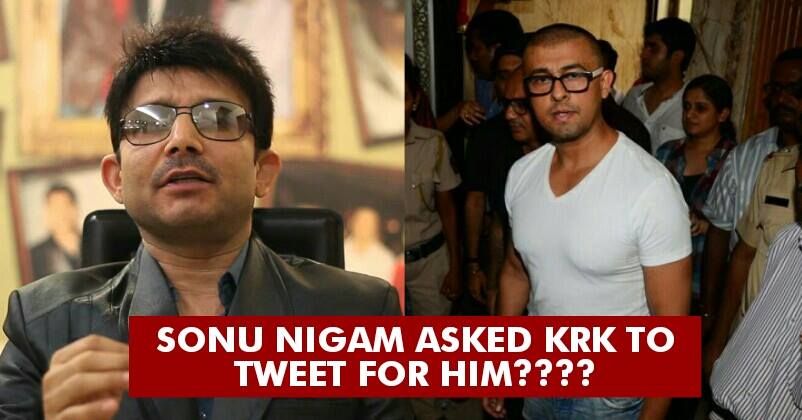 The Azaan controversy surrounding Sonu Nigam is getting more intense. After his tweets on the early morning’s Azaan that went viral all over social media, many people slammed him for his communal views.

Though he found some support in key people who actually understood his viewpoint, it was KRK also on the same list. Kamaal R Khan is known for his insensitive tweets but he did support Sonu Nigam in his opinion.

Kamaal R Khan even mentioned that if he produces his next film, Sonu Nigam will sing all the songs in that movie.

Looks like there is some new twist introduced, a Bollywood producer Mehmood Ali claims that he has proof where Sonu Nigam has asked KRK to tweet in his favor and support him. Mehmood claims to be one of KRK’s key person from his team.

He spoke to a channel and produced the screenshots of the entire chat between KRK and Sonu Nigam.

Sonu Nigam has denied any relationship or personal contact with KRK and said that he doesn’t know KRK at all, here’s what he tweeted: “Swear on my Departed Mother, I didn’t. We dont know each other personally at all.” Even KRK retweeted and wrote that Sonu Nigam is right:

Well, looks like when it is a controversial situation, it is better to be safe than sorry. Sonu Nigam has already made his point and we all should either accept or ignore and move ahead. What do you guys think?

BAD NEWS! The Kapil Sharma Show Is Going Off Air & This Time It Is Confirmed!
Shilpa Shetty’s Son Revealed That Deepika Is Dad’s Favorite Actress! Watch How She Reacted!