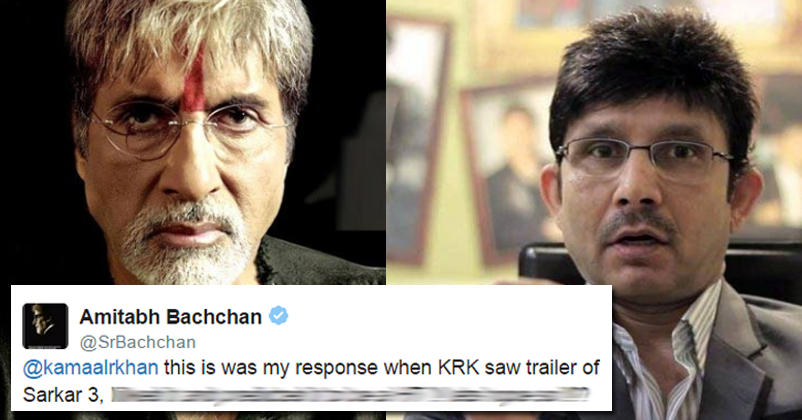 KRK is a name that only a few in the Bollywood want to relate their name with it. His tweets about actresses on his twitter account tell a lot about his nature. If one goes through his bio written on his twitter account, it can be seen that he is a self-proclaimed movie critic. Although his work on this area has been ironically criticized by a lot of people. His choice of words always lands him up in trouble. And shouldn’t they ! ! However, apart from his controversial tweets, this time his tweet made everyone wonder about his TALENT. Yes, you read that right. Recently, he shared a screenshot of his personal inbox on twitter. No, it isn’t what you think, (not a scandal). The great actor Amitabh Bachchan himself texted KRK. And the message was a sweet one, unlike how KRK usually receives. Amitabh Bachchan’s new movie trailer ‘SARKAR 3’ is all set to release and the posters of it are doing rounds on many social media sites. As we all know, before the official launch of the trailer, many people from Bollywood get to see it first. And hence, KRK had his own take on the trailer. He indeed liked it and made the prediction of it being a ‘superhit’. His prediction made Amitabh Bachchan text him personally. Have a look at the screenshot of the message that KRK tweeted.

Well, this was indeed a great milestone for KRK as only a few moments like these come in his life. However, many people didn’t believe the screenshot and called it a ‘photoshop edit’. But Amitabh Bachchan cleared all the doubts with just one tweet that confirmed the authenticity of KRK’s tweet.

this is was my response when KRK saw trailer of Sarkar 3, liked it and predicted it to be a HIT !! lets hope so !!??

Now, what is more important is the fact that SARKAR 3 trailer is all set to release and thanks to KRK, we are all ready and excited about it.

What are your views about KRK’s new accomplishment? Please share your opinion in the comment section below.

OMG This Is What Hrithik Roshan Said About His Father On Kaabil’s Success
Ranveer Singh Just Called Anushka Sharma A ‘BHOOTNI’! SRK Had A Mind-Blowing Reply!