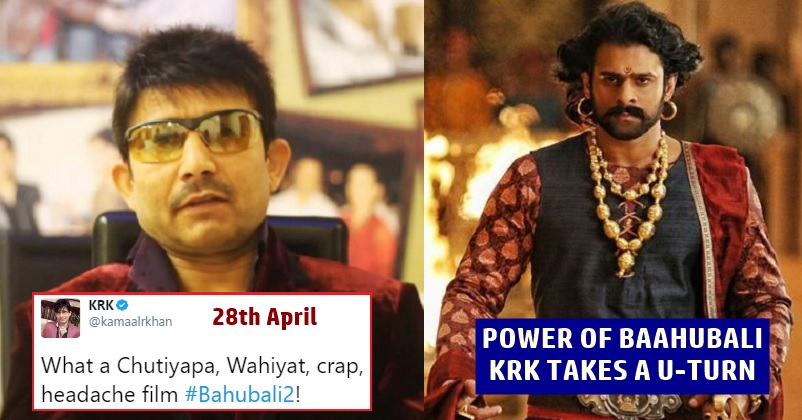 Even though Baahubali 2 is super successful at the Box Office, KRK, the self-proclaimed critic slammed it in every way he could. He called the movie “Wahiyat” and abused it in the worst possible manner. KRK pledged that he will never ever watch any South Indian film. Not only this, he even said that Baahubali was no less than a circus; here are his tweets in case you have missed them.

No matter how much KRK cribbed, the movie enjoyed a successful run and didn’t face any hurdles at the Box Office. People criticized him for giving bad reviews and badly trolled him for talking crap about Prabhas and Rajamouli. However, the success of the movie has finally got KRK back on track; now, he regrets giving a bad review to the flick. After seeing that Baahubali 2 (All versions) is nearing 1500 crores club, KRK realized that he was wrong and hence, took to Twitter to apologize to SS Rajamouli. Baahubali 2 has become the biggest blockbuster of all time and so, KRK has no option but to take a U-Turn.

Here’s what he tweeted out to the director SS Rajamouli;

His tweet read, “I m very sorry for my wrong review of #Baahubali2! I didn’t like it but ppl like it n Janta Ki Awaaz means Nakkare Khuda. Sorry @ssrajamouli”

Why are you giving so much importance?

Y u give so much important to yourself , no one in india 🇮🇳 is concerned or awaiting your review of movie

KRK kabhi nahi sudhrega; we seriously hope he doesn’t take back these words; after all, we hear positive words from him very rarely.