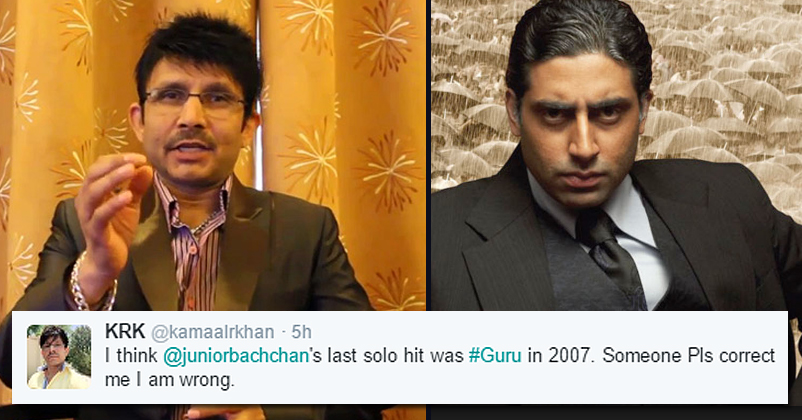 It’s an open secret that Abhishek Bachchan, despite being from a filmy background, could not do that well in his career as was expected from the son of superstar Amitabh Bachchan who is among the best actors of his time. It’s not like he didn’t get good opportunities but an ultimate truth is that you do need luck plus talent to survive in this industry which has simply no dearth of skilled people. Abhishek Bachchan has given very few hits in his Bollywood career so far and is often criticized for the same. The actor frequently has to face trolls and disagreeable comments by haters on social media but he knows how to give them a kickass reply. In past too, he has proved his wit and shut trollers’ mouths up with intellect. And this time again, he showed his never-dying spirit!! The controversy king KRK tried to troll Jr. Bachchan by saying that his last solo hit was “Guru” which came in the year 2007. (And the hidden meaning of this statement is that Abhishek did not give any solo hit for 9 years). And what an awesome reply came from Abhishek! It would make you his fan! KRK made an attempt of managing things with a humble tweet: And once again, Jr. Bachchan nailed it! Twitterati couldn’t stop themselves from interfering and asked Abhishek to ignore KRK or don’t reply to his idiotic tweets!

Stop replying idiot KRK, he is not worth it!

KRK is a good Zero

just ignore the filth sir
He is nothing but a good zero. @kamaalrkhan

What an answer Abhi!

Abhishek, Don’t waste your time in talking to…..

And there was one tweet to which Abhishek himself replied:

And here comes the actor’s reply:

Surely, no one can let you down Abhishek! Hats Off to your wit and awe-inspiring spirit!

These 12 Pics Of Salman Khan’s Panvel Farmhouse Will Make You Green With Envy
Want To Know How Much Bollywood Background Dancers Are Paid? Check The Amount